The Galaxy Gear isn’t a complete disaster — it’s sort of attractive, sort of innovative, sort of futuristic — but it fails to justify its existence.

After a day of using Samsung’s new smartwatch, a device first revealed by VentureBeat, I still don’t understand what problem the Galaxy Gear is trying to solve. It feels like a device built reflexively out of the threat of Apple’s eventual smartwatch, rather than to fulfill an actual consumer need.

So what does it do? The Gear connects to your Samsung smartphone via Bluetooth (right now it only works with the Galaxy Note 3) and lets you see email and text notifications, control your phone’s media playback, and take calls right from your wrist. Oh yah, it has a camera too (right on the wristband), and it can track your steps. 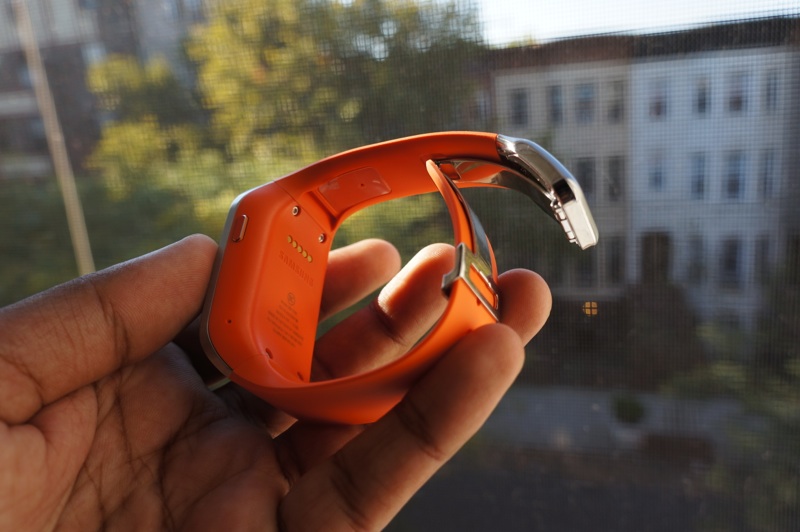 Samsung has tapped companies like Evernote and MyFitnessPal to create third-party apps for the Gear, which add a decent amount of functionality with their own Android apps. But even though there are a handful of apps for the Gear from Samsung and others, none of them feel truly essential. In fact, I can’t think of anything I’d regularly use, or would deem essential enough to purchase a Galaxy Gear.

While the Gear definitely looks bulky, it’s not that different from your typical oversized men’s watch. But where those watches are typically flashy status statements, with high-quality materials and slick designs, the Gear feels like a slightly evolved calculator watch. Its band and rear cover are all plastic, and while there appears to be a bit of metal around the watch face, the visible screws on the face scream “rushed design.”

A half-baked design could be overlooked if the Gear actually did something useful, but at this point there’s not much I can point to. Doing just about everything on the Gear takes several swipes, and while it’s nice to see message notifications on your wrist, I didn’t find it to be much more convenient than pulling my phone out of my pocket. In fact making it more difficult to escape notifications could actually end up hampering your productivity (something that we may also see with Google Glass).

Just about everything the Galaxy Gear does is simply a less-good version of what your smartphone does. Its camera takes low-res two-megapixel pics, and while you’d think it would be convenient to take pictures from your wrist, it typically takes a few seconds (and several swipes) before you can even access the camera interface. Google Glass’s near-instantaneous photo and video taking clearly beats out Gear.

You can also take calls from Gear, where the device functions much like a speakerphone, but it’s useless if you’re actually doing something with your hands (unless you want the person calling you to hear a bunch of noise). While it could be useful for people driving, hands-free car systems are far more effective. In all other cases, you’re better off taking your calls with a microphone-equipped headset.

In many ways, the Galaxy Gear tells us a volumes about Samsung as a company. While it can break new ground and generate plenty of hype, it often fails at creating cohesive experiences. I’ve also noticed that it typically takes Samsung three tries before it gets a handle on new device categories (for example, see the Galaxy S 3, its third-generation of tablets, and the upcoming Note 3). That means, while the Gear may be an unrefined experience now, it could get better in a few years. At that point though, Apple’s iWatch may be on the market and Google Glass will be available to all, so it could be too late to make much of a difference.

Check back later this week for a full review of the Galaxy Gear.