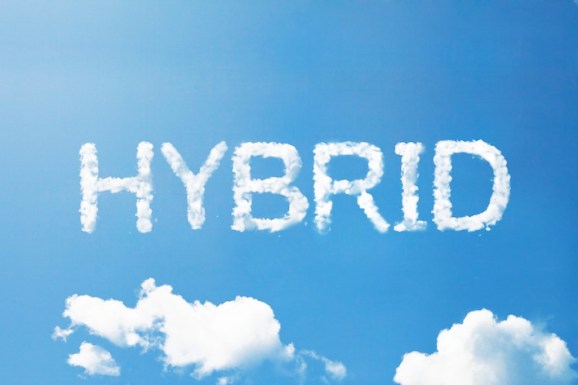 There’s a reason more than 50 percent of cloud buyers have already invested in, or are planning to invest in, hybrid cloud deployments. It’s because hybrid cloud allows companies to combine best-of-breed offerings from both the public and premise infrastructure worlds, enabling them to create an ultimate, custom-tailored solution.

According to industry pundits, the hybrid cloud market is poised for unprecedented growth, despite lingering chief information officer and chief technology officer trepidations about public or private cloud. In fact, in just a few years, we have seen the adoption rates skyrocket. Specifically, a 2012 Intel survey found that 31 percent of IT managers prefer a hybrid cloud compared to public and private deployments. This year, though, Forrester Consulting projects that the adoption rate could soar up to 76 percent.

The most powerful driver of the hybrid cloud operating model is likely agility, or the ability to deliver apps and services seamlessly from your cloud or data center. Enterprises would have data center grade control combined with cloud-enhanced agility into the public cloud.

As cloud migration and integration solutions continue to mature (and support production environments) hybrid clouds could become the norm. That is why I think some recent developments are particularly noteworthy.

In late September I was able to spend some time with Microsoft corporate vice president Brad Anderson, who shared with me Microsoft’s vision of a hybrid cloud platform, including recent announcements of Windows Azure Pack shipping in Windows Server 2012 R2. The Azure code will enable high-scale hosting and management of web and virtual machines.

Microsoft is leveraging its service provider expertise and footprint for Azure development while extending Azure into data centers on Windows servers. That gives Microsoft access to most if not all of the world’s data centers. It could become a powerhouse in months instead of years.

The widespread adoption of Azure within the data center would, in effect, create perhaps the largest hybrid cloud platform leveraging millions of servers and hundreds of Microsoft services, including Azure Infrastructure Services. Azure could fall into the hybrid cloud “bridge strategy” I discussed in my previous post Hybrid cloud – two competing models. So could VMware. In 2014 we are likely to see a direct battle pitting x86 servers with VMware against Windows servers shipping with Azure. Azure has been gaining share since 2011 thanks to very aggressive pricing.

Microsoft versus VMware, round two

While VMware looks to make global capital investments (or leverage partnerships) for its own public cloud infrastructure as a service offering, Microsoft enjoys some key advantages in existing services and a global network of data centers. The Redmond powerhouse can also leverage its existing infrastructure and millions of Windows servers shipping each year, as well as its expertise in software and a robust range of services (including Bing, MSN, Office 365, and about 200 others, per Anderson). A key battle between Microsoft and VMware would make 2014 a pivotal hybrid cloud year. The hybrid cloud could indeed give Microsoft the chance to prevail in ways that it couldn’t with the launch of Hyper-V; as Anderson pointed out, Hyper-V’s market share has been gradually increasing since early 2011.

The clash between Microsoft and VMware could significantly increase the adoption of hybrid cloud operating models. Microsoft could become for the cloud what it became for the PC. It could enforce consistency across clouds to an extent that perhaps no other player could. As the cloud shifts from infrastructure to apps, Microsoft could be in an increasingly powerful position and increase hyper-V share even further by adding Azure agility to the Windows server.

After VMware and Azure, comes Amazon’s AWS. A public-cloud diehard, Amazon still possesses the most seasoned infrastructure, with close to seven years of operating history. Its robust application programming interfaces and services and dominant public cloud market-share make it a force to be reckoned with. Yet its obsession with the public cloud over the hybrid cloud indicates that it may have cultural barriers to overcome before it can access the sizable enterprise market. It has stepped up in building out an enterprise salesforce, which is at least an indication that it may be thinking bigger about the cloud.

Rackspace is in an interesting position

Rackspace has recently formed a variety of hybrid cloud partnerships, and with a massive installed base and a large SME (small and medium enterprise) footprint, it is positioned between AWS on the low end and the massive expansion of VMware and Microsoft into hybrid cloud. While Rackspace is making substantial IaaS infrastructure investments, it is going at a much slower pace than Microsoft, Google, Amazon, and VMware.

Greg Ness is vice president of marketing at CloudVelocity, a provider of hybrid cloud software for the Global 2000. As a Future in Review (FiRe) conference panelist, he was among the first to point out network and security issues with virtualized IT infrastructures and then emerging cloud operating models, which led to the formation of the Infrastructure 2.0 Working Group with FiRe advisor Dan Lynch and a host of leaders in the networking industry. Greg’s Archimedius blog is one of the world’s most influential cloud computing blogs.