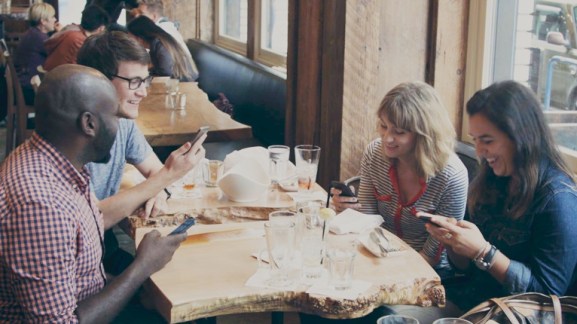 How many times can the David vs. Goliath story be played out? Consumer banking company Simple hopes at least once more, and loaded into its sling is MoneyDrop, an instant money transfer feature.

Announced yesterday, MoneyDrop uses Bluetooth low energy and a token verification system to help users identify others around them using the Simple app so they can send them money.

It takes just a few seconds for the transferred cash to appear in the recipient’s account.

The idea emerged a little over a month ago when engineer Tom Wanielista was out with his sister and her friend. Watching them struggle to arrange a money transfer using Chase QuickPay on their smartphones, Wanielista imagined an instant, no-hassle way to transfer money while out and about. He brought the idea in to work, the employees bounced it around, and now the feature is undergoing a final polish before its planned release in the next few months.

MoneyDrop is indicative of the way Portland, Ore.-based Simple does business — an improvement that goes from idea to reality in record time.

“The big difference between us and larger banks is that our platform is brand new. Introduced just a year ago, the way we’ve designed our architecture lets us be more flexible and roll out new features in no time at all,” said Wanielista.

Founded in 2009 by Josh Reich and Shamir Karkal, the company has received a total of $18.1 million in funding and currently has over 55,000 customers.

The company has partnerships with Visa and The Bancorp Bank, allowing it to provide debit cards to users as well as FDIC insurance.

Other features that Simple touts are Safe-to-Spend and Goals, re-imagined versions of current balance and savings. Users are prompted to create a budget using Simple, and the two features automatically set aside money, making sure a user doesn’t overspend in a month or miss saving for a longer term item.

Block Card lets users who have lost their debit card deactivate it directly from their phone as soon as they realize it is missing.

Time will tell if Simple is able to challenge the likes of Bank of America and Chase Bank, but with an attractive slew of innovative features, it is likely to convince more than a few people to make a bank switch.