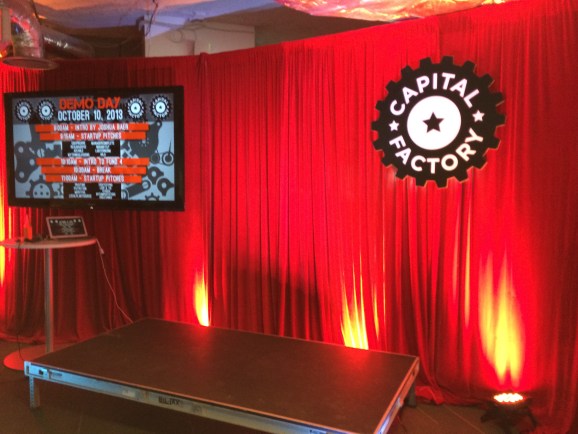 Like everything in Austin, Texas, the startup community is growing at a fast pace. And at this year’s Capital Factory demo day, there were almost twice as many companies worth pointing out (and not including two that are still in stealth mode).

The seven startups listed below are part of the Capital Factory’s accelerator program, which has seen about 40 companies pass through since it launched. Those admitted give up 2 percent equity in the company in exchange for part-time access to the incubator’s co-working space in the heart of downtown Austin and about $50,000 worth of free hosting, software, and services.

I really don’t need to spend much time convincing anyone that endorsements from well-known people are an extremely effective way to sell a product. Finding all the endorsements made by one particular celebrity, however, will usually require lots of time and effort, which is something startup Equipboard wants to fix.

“[Thousands] search for ‘Lebron James shoes’ on Google every day, so obviously this is something people are going out of their way to find before making a purchase,” said founder Michael Pierce during his pitch. He and fellow his founder, Giulio Chiarenza, are the sole employees for the startup, which launched back in April.

The site basically collects endorsements of products from musicians, athletes, actors, and any other celebrities by scouring social networks whenever a product is mentioned. The Equipboard will showcase all of these items on a separate page, along with links to when and where that celebrity endorsed it. Pierce said the site, which is seeing steady growth and plenty of return visitors, primarily generates revenue via referral/affiliate product links. Other possible streams of revenue include sponsored endorsement pages from a brand or celebrity as well as integration with online retail sites to display celebrities that have previously endorsed one of their products. Pierce said the startup will hit profitability from affiliate fees alone before the end of the year, which is notable since neither he or Chiarenza have spent any money promoting the service. Equipboard is currently bootstrapped, but it’s seeking $300,000 in funding to build out its other revenue streams and grow the service overall.

I’ve never enjoyed my experience browsing popular real estate listing sites like Zillow that often display tons of information that is either outdated or irrelevant. During his demo pitch, NuHabitat founder and licensed Realtor Jeff Burk explained why the Zillow experience is broken (at least for me) as well as how his property-listing startup plans to offer something much better.

“A listing on Zillow may display the number of days that home has been on the market and any changes to the asking price. But that’s only letting you see a portion of the picture,” Burk told me after his pitch. “Real estate agencies actually have a service that shows all of the cumulative listing data about a home from the first time it was listed instead of just the last listing.”

NuHabitat’s business model is based on getting real estate agencies to pay a monthly fee of $50 and relies on those agencies to keep property listings up-to-date. And unlike its competitors, NuHabitat will be able to surface any changes to a listing immediately after an agent makes an update. Consumers, on the other hand, use the service for free and benefit from the transparency of seeing all the same data on a listing that their agent can see. NuHabitat is currently only available for properties in Houston but will tentatively launch in Austin in the near future. The startup has raised a small amount of funding and is asking for a fresh $300,000 investment.

Anyone who’s worked at a business that operates multiple locations likely understands what an enormous pain in the ass it is just to communicate. In a previous life, I was the one tasked with sending out communications for a convenience store chain with hundreds of stores spread out over a quarter of the country — some of which still relied on a dialup Internet connection. That said, using e-mail, phone calls, and fax messages really doesn’t cut it.

ManagerComplete is a startup aimed at fixing those messy lines of communication via a SaaS platform built specifically for companies with multiple stores. The platform enables a company’s central headquarters to send out daily instructions or request immediate feedback on products or displays, and employees can quickly identify problems that require upper management’s attention.

Founder Jason Duncan said the startup already has a handful of chains signed up for the service, including Planet Fitness, Darque Tan, and Southern chain Express Oil Change (which has over 200 locations). ManagerComplete also just signed up Dunkin Donuts to a pilot program of the service. The startup itself was founded in 2006 and is seeking a new $250,000 round of investment to hire and build a stronger sales team to go after larger clients.

While I’m sure it’ll come as a complete surprise, MyTennisLessons is a startup focused on helping people find and manage tennis lessons. What might surprise you is that the company consists of six founders that all live in a huge house in downtown Austin that also doubles as an office. You could even say that CEO and cofounder Andrew Marcus is sort of the Mark Zuckerberg of tennis startups, but that wouldn’t exactly be true since his first big startup is actually profitable, long before he even contemplates an IPO. It’s set to generate $876,000 in revenue for 2014 based on current growth numbers, Marcus claims.

MyTennisLessons is a pretty straightforward service. Instructors are invited to list themselves on the site to make it easier to manage both new and old clients. Pricing is determined by the instructor, but the sales strategy is simplified for consumers, who can only sign up for three different lesson packages (six, 13, and 22 lesson packages). Payments and scheduling is also taken care of through the app, and MyTennisLessons takes a cut of all transactions. Instructors are responsible for finding and booking tennis courts within their area to conduct lessons.

The startup does plan on growing its tennis lessons business, but it would also like to expand into other athletic services like personal training/trainers. MyTennisLessons plans to raise a $500,000 round, which would go towards launching a separate personal fitness-focused version of its Tennis site and help bring on additional employees familiar with the business of fitness training lessons.

Loop and Tie is a gifting service that is targeted at large businesses and organizations that frequently spend money on gifts for its employees or loyal clients. I can say with utter certainty that 99 percent of all corporate gifts I’ve received have either been gift cards (ugh) or gifts that suck. That said, Loop and Tie attempts to fix the group gifting process by creating a platform that’s as easy as buying gift cards while still giving recipients a hand-picked gift.

“We wanted to make something that was like having your boss take you to a store, and tell you to pick anything you wanted,” cofounder Sara Rodell told me after her demo pitch.

The service works by having a gift buyer choose the amount they’d like to spend on each person as well as an item that falls within that price range. Buyers are charged for the total number of gifts up front, and recipients can then redeem those gifts after receiving an email inviting them to Loop and Tie’s site. If you decide you don’t like whatever gift was initially suggested, you have the option of choosing from a hand-picked selection of mostly locally distributed items that fall within the same category and price range. Once a gift has been selected, Loop and Tie automatically ships it to you.

The startup has previously raised $625,000 in funding to date and is seeking an additional $375,000 investment. The service plans to official launch in the near future.

Aceable is an education startup that wants to revolutionize all those mind-numbingly boring online courses. More specifically, it’s going after required courses, like those created for defensive driving, drivers-ed, employee training, corporate compliance, or standardize test prep. Required courses are often neglected because you have to take and pass them regardless, which could be why most institutions haven’t bothered to update them in what seems like a decade in some cases. Academic online courses, on the other hand, are strictly voluntary, which means no one is going to sign up for them if they’re awful.

Founder Blake Garret said Aceable courses will use a combination of game mechanics and reward systems to enhance the learning experience — and it’ll let you take these courses from your mobile device (ya know, because its 2013 and people tend to enjoy smartphones and tablets now). During the demo pitch, Garret said Aceable will initially focus on growing within Texas and California, since the two states often set the bar in education rest of the country. Aceable has previously raised $75,000 in funding to date.

It important to point out that LanternCRM actually has nothing to do with the Green Lantern Corps, power rings, or space travel. But it might help small businesses keep their sales teams focused on talking to customers rather than getting distracted with DC superheroes, jewelry, sports, and such. LanternCRM is a service intended to help small businesses keep track of all their customer relationships as well as the sale data associated with those customers.

An overly simplified description might be a “no bullshit” version of SalesForce, which founder Alex Smith identifies as a platform that’s too excessive and needy for most smaller companies.

Smith said LanternCRM is built to eliminate the guesswork of managing and connecting with customers. It automatically creates profiles for each customer, tracks the last time you spoke with them, and even send notifications suggesting when you should follow-up with clients that you having spoken to in a while. It also keeps a log of all interaction and activity for each customer. (For example, if you’ve missed three calls in the last week from a very big client that might be threatening to take their business elsewhere, LanternCRM’s activity tracking will show you before you miss a fourth or fifth call.)

Founded in 2012, LanternCRM is profitable with 502 paying customers. The startup planning to raise a $200,000 round of funding to continue expanding the business.