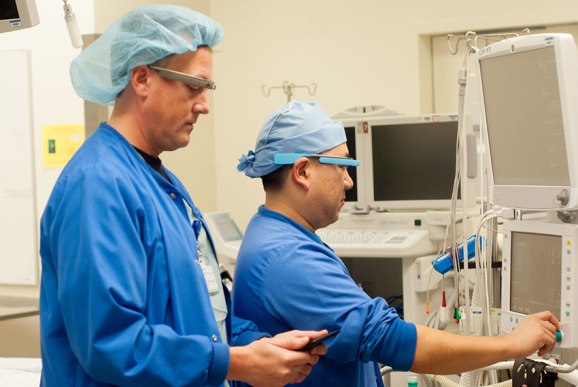 SANTA CLARA, Calif. — Remote healthcare has long been one of the most exciting promises of the Google Glass platform, and today at DEMO, we got a taste of how that would actually work.

Pristine EyeSight and Pristing CheckLists from startup Pristine are two new applications designed for surgery, anesthesia, and telemedicine in general.

EyeSight allows healthcare professionals, first responders, and others to stream video to and from Google Glass units as well as iOS, Android, and Windows PCs to better perform operations, conduct consultations, and teach or train.

CheckLists generates voice-driven directions for doctors, technicians, nurses, and other staff to help coordinate around patient care and ensure compliance.

The apps are currently being tested at the University of California, Irvine, where pilot participants have called the program “very promising.”

Both applications will become widely available when Google Glass starts shipping, likely toward the end of 2013 or the beginning of 2014, the company stated in a release on the launch.

“We have ER doctors and OR doctors beaming video to nurses for consults whenever they like,” said founder and CEO Kyle Samani onstage today. He continued that tablet and phone competitors lead to a “clunky” patient-professional experience.

“[Surgeons] have already been doing telerobotic surgery and using Google+ Hangouts,” Samani continued. “You don’t get a tactile feel, but we provide the best experience for remote surgery.

“It’s going to be pretty rough for other companies to do this.”

For the future, the team is looking into more avenues, such as prescriptions, emergency rooms, and intensive care units.

Others in the healthcare community have raised concerns about Glass in the OR, stating roadblocks around maintaining sterile environments and preventing distractions for surgeons as well as maintaining the security of patient information.

As Texas Tech’s chief medical officer Arun Matthews put it in a recent VentureBeat interview, “Industry giants will not be willing to gamble on such a venture until there is either a huge public outcry or the government mandates this level of innovation as the front-end standard for electronic health records. I’d say we’re looking at at least five years.”

But the tech industry, particularly investors, are looking through those years with optimism and eagerness.

“All kinds of tasks in enterprise and business are done so much better hands-free, but the ones that are most attractive to me are in health care,” said investor John Doerr in a recent VentureBeat interview.

“It’s so screwed up. But you can imagine all the knowledge workers in a hospital having Glass and making better decisions.”

Six-month-old Pristin is based in Austin, Tex., and has raised a seed round of $500,000. The company was part of the Capital Factory incubator, and its three founders all have backgrounds in healthcare as well as policy and technology.