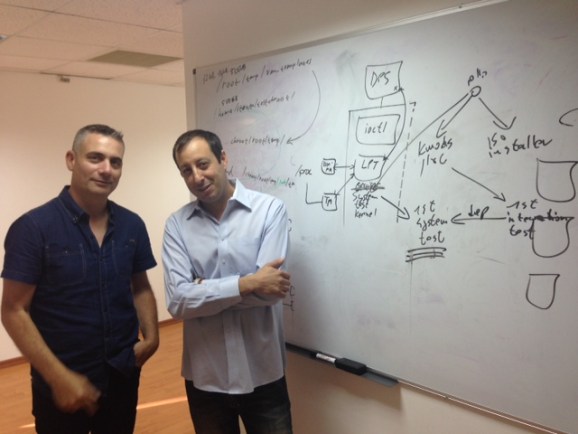 One of Israel’s most successful entrepreneurs is back with a stealthy new startup, dubbed Stratoscale, that is building new software for large data centers.

Ariel Maislos spent a decade in the Israeli army developing data virtualization technologies before starting several companies. One of these startups, Anobit, was bought by Apple for nearly half a billion dollars in late 2011, one of its largest acquisitions to date.

With his latest venture, Maislos is developing modern virtualization technology with chief technology officer Etay Bogner. Bogner is also a successful entrepreneur; his previous company Neocleus was acquired by Intel.

According to Maislos, companies like Facebook and Twitter aren’t buying individual machines anymore, but today’s operating centers are still optimized for single machines. Stratoscale is building the new operating center for the modern data center setup, which will theoretically bring faster performance and lower power usage.

Stratoscale’s founders had no shortage of interest from investors. Until now, the company has been a self-funded effort. However, Maislos told me he believes in the “VC model,” meaning the guidance, the capital, and the customer connections that are offered by the top firms. Today, he closed a $10 million round led by Silicon Valley firms Battery Ventures and Bessemer Venture Partners.

Stratoscale is still developing its technology and reaching out to potential customers. “What we are trying to do is simplify the data center and virtualize it at a different scale — on a larger scale than a vendor like VMware,” he said. Maislow is making a firm bet that hardware will become commoditized, and the real opportunity is software infrastructure for scalable computing.

“Under this system, each workload can run on the best matching hardware. All available resources are used, and a unified compute and storage infrastructure is achieved,” he explained.

With the funding, Maislos is expanding the team. He’s currently in Silicon Valley screening potential candidates.