We’re obsessed with Stallman around here.

The Last Hacker, as he’s sometimes called, is one of the heroes of the free and open-source software movement; the web would be a very different place without people like him breaking the boundaries between intellectual property and the free exchange of knowledge.

We are beyond thrilled that Stallman will be speaking at DevBeat 2013, our first-ever developer conference coming up next week in San Francisco. Before you read the rest of this article, go buy your tickets, and use the code ‘VB-VIP‘ to get a 25% discount at checkout.

We all like to talk the talk about free sharing of knowledge, software, music, whatever. But how many of us practice freedom right down to the bone?

Stallman is famously particular about his dedication to free software. If it ain’t free, he ain’t using it. He’s been called a fanatic (and much stronger terms) for that dedication, but he’s probably the one person in the world we can say with 100 percent certainty is not a hypocrite.

Kudos, Stallman, for standing up for your beliefs and being a great example of true commitment to a cause — and for illustrating how to work through a compromise without “compromising the goal of freedom.”

The Free Software Foundation is Stallman’s 30-year-old child. This non-profit organization advocates for all kinds of software freedoms, from “copyleft” computer programs to DRM-free movies to ensuring that free-software licenses aren’t being abused.

The FSF maintains a directory of free software projects and advocates for policies that promote digital freedom and privacy protection. The org also provides alternatives to proprietary software, from Java compilers to desktop environments. 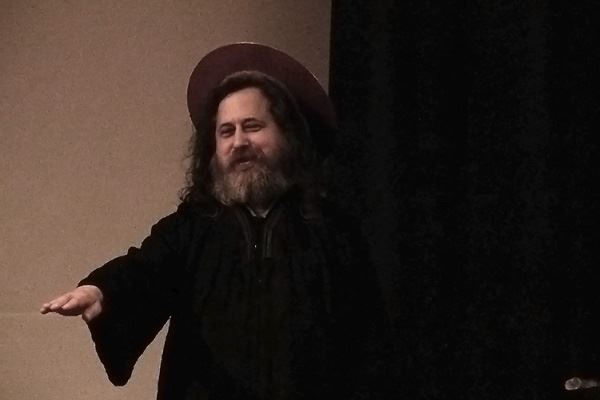 A play on the name of Jesuit founder St. Ignatius, St. IGNUtius is a character developed by Stallman (himself an atheist) that shows his more lighthearted side.

From the St. IGNUtius page:

Sainthood in the Church of Emacs requires living a life of purity—but in the Church of Emacs, this does not require celibacy (a sigh of relief is heard). Being holy in our church means exorcizing whatever evil, proprietary operating systems have possessed computers that are under your control, or set up for your regular use; installing a holy free operating system (GNU/Linux is a good choice); and using and installing only free software with and on the system. Note that tablets and mobile phones are computers and this vow includes them. …
Warning: taking the Church of Emacs (or any church) too seriously may be hazardous to your health.

Stallman’s love of folk music married to his love of free software resulted in the birth of this surprisingly catchy ditty.

Editor’s note: The interview videos, recorded and uploaded to Wikimedia in Ogg Theora format by the author of this post, have been redacted due to repeated deletions by the insane editors of Wikipedia. So much for crowdsourcing. Point is, Stallman is a generous, thoughtful, thorough, and funny interviewee.

3. His place in MIT history

Have you read the book Hackers? No? Put down your computer and go read it now.

Stallman manages to maintain his relevance in the current times of NSA spying and BitTorrent and what have you, but his origin story is rooted in the hacker culture of decades past, when MIT — not Silicon Valley — was the ultimate incubator of technological innovation.

2. His love of folk dance

We’ve already touched on Stallman’s penchant for authentic folk music (not that Peter-Paul-and-Mary crap), but did you know he can cut a rug, too? From folk dance to Soulja Boy (you can search for those videos yourself), the guy’s light on his feet and a delight to watch.

At our first-ever developer conference, we asked pretty-please-with-a-cherry-on-top if our hacker hero would consider coming in the flesh. And whaddaya know? He said yes!

We hope you’ll join us to hear his ever-so-relevant talk on patents and software licensing. Remember: The discount code for tickets is ‘VB-VIP‘.