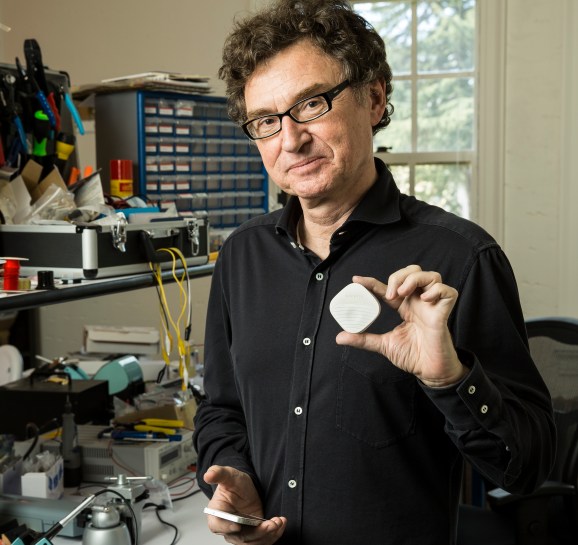 Scanadu, the company behind the ‘medical tricorder’ device that broke crowdfunding records, has raised its first round of traditional venture funding.

The company claims it is “taking your smartphone to med school” by building devices that let people track their vitals at home. Health-monitoring tech is a hot space, given the burgeoning interest in wearable technology from investors, the press, and big brands, like Nike and Samsung.

“Scanadu is right at the heart of the next generation of computing which combines mobility, sensors, cloud, and big data,” said investor Jerry Yang, the former chief executive and cofounder of Yahoo, in a statement. “I am bullish on Scanadu and its potential to revolutionize the way we think about our health.”

In recent months, Scanadu has recruited some big name investors, including Yang, who is also the founding partner of Ame Cloud Ventures, and Tony Hsieh, the chief executive of Zappos, who invested through his VegasTechFund. Relay Ventures led the series A funding round, which totaled $10.5 million.

The company has also established a medical advisory board and will appoint doctors, former government employees, academics, and researchers to help it overcome any regulatory hurdles. The first clinical trials for Scanadu’s devices will take place at Scripps Translational Science Institute.

Above: Scanadu’s Scout device will sell for $199

Scanadu is developing two consumer health devices: Scout and ScanaFlo. Scout has received the most attention from the press, but ScanaFlo will be the first device to hit the market.

In an interview, chief executive Walter De Brouwer told me that ScanaFlo is expected to launch in 2014. It can turn your smartphone into a urine analysis reader that will test for pregnancy, as well as glucose levels, protein counts, and more.

Scout’s team still needs to conduct pilot tests, clinical trials, and usability studies. In July, Scanadu secured over $1.6 million on Indiegogo and used that money to build the prototype of a sensor that can test for a variety of medical conditions.

Scout is designed to collect data on vital signs, including pulse, heart rate, respiratory rate, blood pressure, temperature, and even emotional stress. It can read all this when you hold it against your temple for 10 seconds.

The device, which has been billed as “the biggest innovation in home medicine since the invention of the thermometer,” will need approval from the Food and Drug Administration (FDA). It is expected to sell to consumers for $199, which is higher than the original planned price of $150.

De Brouwer is optimistic as the FDA just released its final guidance, which clearly explains how it will govern the next generation of mobile medical devices.

“Government and health care is getting ready for a big change,” he said by phone. “We’re seeing great signs of progress and have even zeroed in on our manufacturer.” Scout is expected to be commercially available in late 2014 or early 2015.

Other participating investors in the round include Broe Group, Mindful Investors, and Redmile Group. With this round, Scanadu has raised $14.7 million in funding to date.