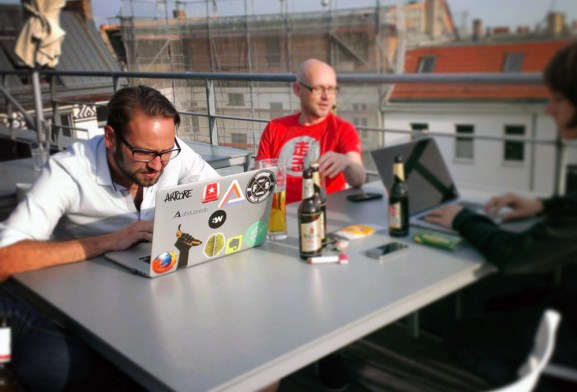 Members of the 6Wunderkinder team work on a Berlin rooftop

The news comes just over a week after rumours circulated that 6Wunderkinder had secured a $30m financing round from Sequoia. Though the funding isn’t quite as large, the new investment does bring the company’s total funding to over $30m. 6Wunderkinder founder and CEO Christian Reber told us his company has a valuation of around $60m and more than six million users internationally.

The new investment is Sequoia’s first foray into the German startup scene – well-established in the U.S., it has impressive companies in its portfolio including DropBox, Google, Evernote, Airbnb, Apple, YouTube and PayPal. Sequoia’s newly knighted partner Sir Michael Moritz will join 6Wunderkinder’s board.

Reber told us that Sequoia contacted him in 2011 when 6Wunderkinder was raising its Series A round. At the time, he chose not to go with the US-based VC but, rather, seek funding from investors closer to home. The startup secured $4.2m in Series A funding from London-based Atomico and German High-Tech Gründerfonds, which Earlybird bought out of the company in 2012. Now that Reber wants to focus on a US expansion – two-thirds of 6Wunderkinder users are already in the States – having an experienced and established investor on board can only be an asset.

6Wunderkinder has always been more focused on design than reinventing the wheel, it’s main selling point is easy use and beautiful design. Sir Michael Moritz said: “It brings order to the chaotic challenge of tracking ‘to-do’ items. The apparent simplicity of Wunderlist is a tribute to the underlying power of its design. For Sequoia, our new relationship with 6Wunderkinder is a continuation of our deep interest in cloud-based productivity applications, which led to our earlier business partnerships with Dropbox and Evernote.”

The company is busy setting up an office in San Francisco, which will house business development, customer support and sales teams. Reber told us they’re also working on Wunderlist 3, with a rewrite and redesign, plus more focus on collaboration. Earlier this year, 6Wunderkinder introduced Wunderlist Pro, a paid version targeting businesses and teams. The conversion rate has been successful, Reber told us, though by collaborating with Sequoia he hopes to accelerate Wunderlist Pro’s adoption globally.

For related posts, check out: