One man’s broken iPhone is another man’s coffee table. Or at least that’s what Twice Used thinks.

The company, which started out by repairing iPhones, is now looking to upcycle them, creating items like clocks, coasters, picture frames, and even coffee tables.

Chris Koerner, who started the project, says on its Kickstarter that the idea came after realizing that many of the iPhone displays that his company couldn’t fix were just thrown away. This created a big opportunity: Instead of tossing hundreds of thousands of busted screens, he could turn them into something else.

Here are a few examples of that “something else,” none of which have been priced so far. 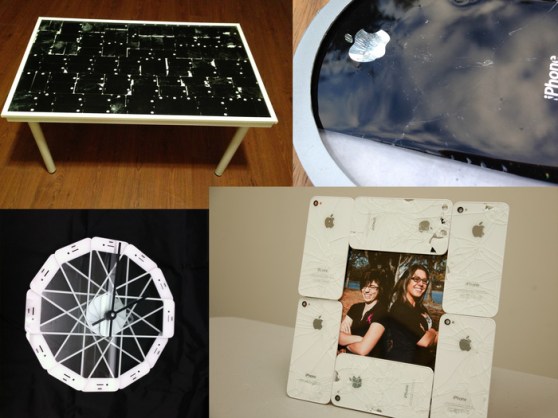 It’s a neat idea, and it’s not that hard to imagine your iPhone coffee table being the conversation topic of many parties. But Twice Used has a pretty significant challenge: In order to keep making its products, it needs a continuous supply of broken iPhones.

While the company says it has 20,000 busted displays right now, Twice Used’s coffee table alone requires 100 of them. Other items, like the clock above, use 12 panes of busted glass.

Twice Used says that the solution to its supply problem is to team up with more repair shops, which is ostensibly where the Kickstarter comes in.