Taboola is raking in the moola. (Aren’t bad rhymes the best?)

The startup, which powers a content recommendation platform, revealed that it crossed $100 million in annual run rate, which means that if it keeps making money at its current rate, it will rake in $100 million in a year. It is now profitable with 120 employees, and claims to have one of highest revenue-per-employees rates in tech. 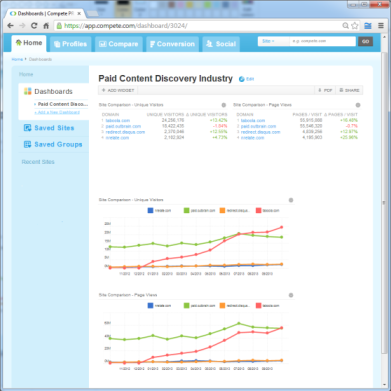 According to Compete, Taboola is also the industry leader for paid content discovery, ranking ahead of Outbrain, Disqus, and nRelate in both unique visitors and page views.

Taboola’s marketplace has marketers and brands on one side, who bid to distribute their content on top publisher sites, and algorithms on the other side, to match content with the most relevant users and predict what they want to watch.

Brands and marketers use the technology to maximize their reach and optimize audience engagement. Publishers use it  to “re-circulate” their own traffic by generating on-site content recommendations.

Taboola serves 1.5 billion recommendations daily on sites including Time.com, NY Times, Fox Broadcasting, USA Today, Bloomberg, The Weather Channel, and BusinessWeek. (Disclosure: VentureBeat also uses Taboola, whose story recommendations appear at the bottom of every story on our site, and the partnership generates revenue for us.)

One of Taboola’s areas of focus are videos. People love videos. We watch them by the billions and thus they are the most popular formats for ad buyers. CMO.com conducted a study which found that consumers are 27 times more likely to click through online video ads than standard banners, and U.S. digital video ad spending will nearly double in only four years, climbing from $4.14 billion this year to $8.04 billion in 2016.

There is a lot of opportunity in this space, and Taboola is clearly capitalizing on it.

Taboola is based in New York City. It has raised $40 million to date. Investors include Israeli firm Pitango VC, Evergreen Venture Partners, WGI Group, and Market.