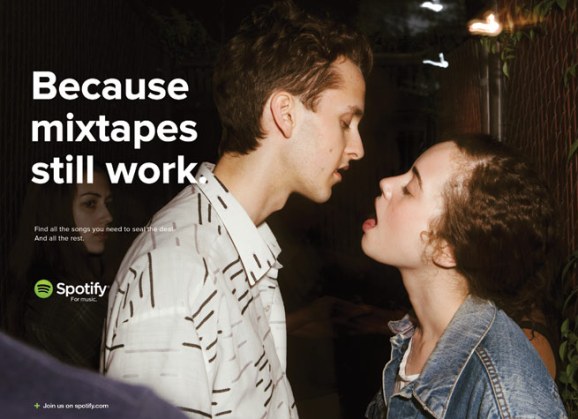 And a $4 billion valuation.

That’s what good ol’ Spotify’s been up to today. We saw lots of other deals, but we kinda feel bad for any company that planned to announce their own sweet fundraise today. On this day, Spotify is the whale, and everyone else is a mere minnow.

Except here, in this democratic corner of the web called Funding Daily, where we present roughly the same number of words on every funding story, regardless of how large or small the deal.

Let’s get on with it!

Spotify just raised a lot of money — $250 million, to be more precise. That means it’s nearly doubled the total amount of funding the company has raised prior to the new round to a whopping $533 million. The new round also bumps Spotify’s estimated valuation to north of $4 billion. And while Spotify is firmly focused on growth and maintaining a varied library of songs, the company has also been adding new features to the service, building its advertising model for the free ad-supported version of the service, and cultivating its own application platform that enables developers build music services on top of Spotify. Read the full story on VentureBeat.

Xenex makes robots that can automatically disinfect rooms with the power of ultraviolet light. These bots can stamp out the kind of virulent pathogens that are so dangerous in hospitals, where patients may already been in sensitive condition. The cash comes from Battery Ventures, Targeted Technology Fund II, and RK Ventures and will go toward product development, international expansion, and increasing the company’s U.S. sales force. Read the full press release.

Fluential claims to have devoted more than 85 “man-years” of research to besting Siri. Today, the company announced the close of $8 million in angel funding led by billionaire Patrick Soon-Shiong. Fluential has developed voice-recognition technology that makes it possible for your device to understand what you say. Read the full story on VentureBeat.

CoachUp raised $6.7 million to connect athletes with private coaches via its Web and mobile applications. Athletes (and their parents) use the site to search for coaches in their area, browse through coach profiles and reviews, and book sessions on the site for a wide range of sports. Point Judith Capital and General Catalyst Partners led this round, with participation from Datapoint Capital, Suffolk Equity Partners, and angel investors. Read more on the CoachUp blog.

Here’s how the app works: You take a picture of some poor passerby on the street or snag an image from the Internet and demand from other Internet-using super-shoppers details on the product in question and how you can get it. Alternatively, you can look at someone else’s uploaded pictures and be all like, “Oh, yeah, you can get that at Neiman’s or 7-11 or whatever, here’s a link.” One of the spokespersons for the app is quoted as saying, “It’s like hanging in the fitting room with your close friends.” Read the full, bizarre story on VentureBeat.

Locality has raised $4.3 million to provide a better search experience for local services. Today, it expanded into 10,000 U.S. cities to connect consumers with local merchants such as hair stylists and dry cleaners. It features current information on pricing, available services, and hours that are often not available or out of date on other sites. Matrix Partners, Lightbank, ffVC, Cowboy Ventures, and Founder Collective participated in this round.

Multichannel, which manages and tracks marketing efforts across (shocker) multiple channels, just raised a $3 million seed round from angel investors in Europe and Asia to bolster its engineering efforts. Through Multichannel’s cloud-based dashboard, customers like Cisco and China Telecom can get a clear picture of the return on their marketing spend. Read the full story on VentureBeat.

Quarri gets $2.35M to protect your weakest link: the browser

Browser security company Quarri received $2.35 million dollars today, sticking behind the idea that the browser is one of the weakest points in a company’s system. The Austin, Texas-based company has three different browser protecting products: Quarri Perimeter Shiled, Quarri Data Safe, and Quarri Amored Browser. The three together are intended to keep your browser safe from attempts to hack in through vulnerabilities and keeps, “careless insiders from replicating sensitive information.” The funding, Quarri’s first, was led by Wild Basin with participation from the Texas Halo Fund, Daylight Partners, and unnamed existing investors. Read the full story on VentureBeat.

Wevorce has raised $1.7 million to make divorce suck less. The Y Combinator startup puts software at the center of divorce negotiations to help iron out the various agreements and settlements and track all of the paperwork. The goal is to make divorce proceedings cheaper, quicker, and more amicable. Foundation Capital and Sam Altman participated in this round, which brings the total capital raised to $2 million. Read more on VentureBeat.

“Talentory.com, the Zürich, Switzerland-based online headhunting platform, which presently serves over 1,000 European clients including a number of large regional and global employers with recurring talent acquisition needs, has closed CHF 1.5m (U.S. $ 1.7m) Series B round of funding from RITF. RITF was established by Black River Ventures and Third Rome Group in early 2013.” Read the Talentory blog post.

Those Bostonians sure like their sports. A social sports startup called Fancred raised $1.5 million today for its iPhone app that connects sports fans to expert commentators, team spokespeople, and teams. Fans can share content on social media and get a score for their engagement. It participated in TechStars Boston. Atlas Venture, Militello Capital, Star Power Partners, and angels participated in this round.

Got a Christmas present for your friend in London, but don’t want to spend the money to ship it from California? Friendshippr wants to connect you with Facebook friends heading that way who might be your personal FedEx. The company received $670,000 from angel investors in Dubai today. Yes, it’s just as it sounds. Friendshippr, an iOS app launching in December, connects you with your existing Facebook friends to help you find people to transport items for you. Read the full story on VentureBeat.