PowerUp Toys is raising money via crowdfunding for a novel and clever idea: attaching a real airplane motor to a paper airplane. Once you do that, you can fly it with an iPhone’s touchscreen.

Above: Shai Goitein of PowerUp Toys

It’s a zany idea from Shai Goitein, an inventor who has worked on the idea for six years. He calls this version PowerUp 3.0, and he hopes it will be the one that makes it into mass production. The company hopes to raise $50,000 in a Kickstarter campaign that is starting today. If it works, it could turn out to be a happy marriage of homemade toys and cutting-edge technology.

Goitein is a former pilot who loves to fly and wanted to share the joy of flying with kids and adults alike. Paper airplanes, of course, fly only for a few seconds. But with the motor and control system that Goitein’s company has built, they can have a range of 180 feet and fly for 10 minutes.

“Magical is the feeling when your home-made paper plane soars into the skies and doesn’t come down,” Goitein said in an email.

Goitein is trying to pack as much technology into as small a space as he can. His whole rig weighs eight grams, and the circuit board is just three grams.

Above: The control module weighs around 3 grams.

“Our goal is to make you feel like the Wright brothers when Flyer I took to the skies,” Goitein wrote. “We want to empower you to design your own flyer and conquer the skies with our module.”

PowerUp 3.0 is entirely controlled by the app. If you tilt your phone, you can control the high-precision rudder, making the plane go right or left. Sliding the thrust lever on the touchscreen will increase propeller speed and allow the airplane to gain and maintain altitude. The circuit board weighs 1 gram and is powered by a Lithium Polymer battery.

The company is based a half hour outside of Tel Aviv in Israel and has six employees, including Goitein. Rivals include all sorts of radio-controlled model airplanes, but no one is trying to give this kind of performance to paper airplanes, Goitein says.

The PowerUp system uses the iPhone to communicate via Bluetooth Smart, the lower energy version of Bluetooth, with a Texas Instruments chip on the tiny green printed circuit board. That allows you to control the thrust and the rudder, giving you full control over the airplane. Goitein has been toying around with planes since age 7. He moved on from paper planes to hang gliders as he got older, and he spent 15 years as a cargo pilot for the Israeli air force. He became an industrial designer, and he also worked for 10 years as a manager of B2B product design for Kodak.

He collaborated with another startup, TobyRich, based in Bremen, Germany, to get help with the Bluetooth Smart solution for gadgets. That helped Goitein move from a radio-controlled module to a smartphone-based control. Goitein got excited about the project in 2007 when he volunteered to teach immigrant kids the principles of aerodynamics. He did research on advances in micro indoor flight and came up with the idea for a remote-controlled paper airplane. The idea gathered momentum, and by 2011 he incorporated a company to build the device.

In 2012, PowerUp 1.0 won the ATA Best Hobby Award and was featured on The Tonight Show with Jay Leno. In 2013, Goitein showcased an early prototype of PowerUp 3.0 at the New York Toy Fair, where it won the Popular Science “Best of Toyfair” Award.

The iOS design is complete, but the Android version still needs testing. Goitein believes he is pushing the limits of Bluetooth Smart technology.

“We do something that nobody has done before,” Goitein wrote. “It’s surprising to people when [they] see that it really works.”

Check out our photo gallery below. 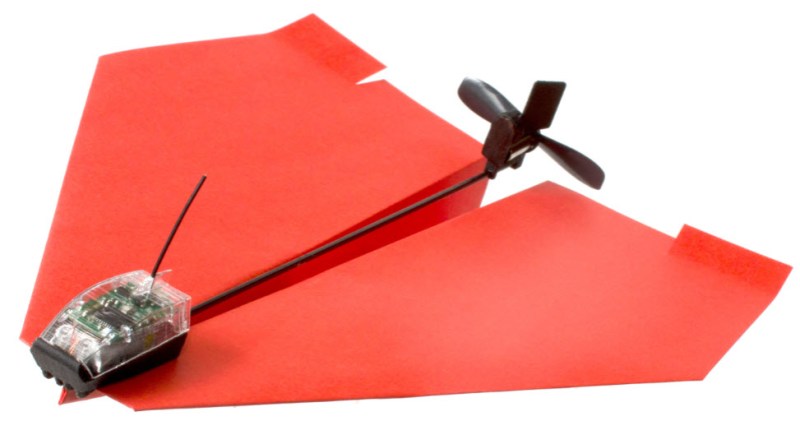 Above: A propeller fits on the back