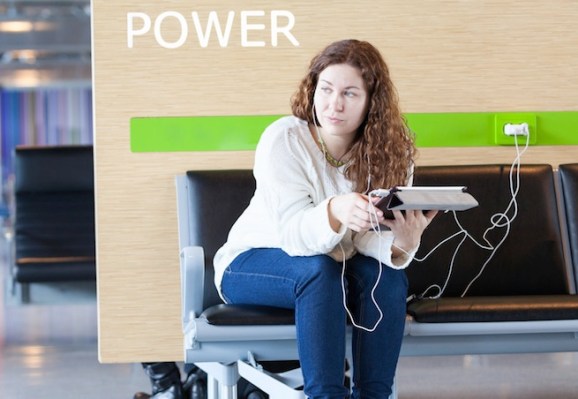 Sick of charging your devices at airports and coffee shops? Soon, you may not need to anymore.

For most of us, charging a device every six to eight hours (and sometimes even more often) can be a burden.

But a new, flat fuel-cell battery developed by a startup called Ardica could change all of that.

Researchers in Los Angeles will soon launch a battery that attaches to any device, including iPhones, Fitbits, and Kindle readers, and provides seven days of run time on a single charge. If they can make this technology work — and sell it — you may never have to scramble for a public wall socket to charge your phone again.

Ardica has intentionally stayed under the radar so that it can build the technology before potential competitors get wind of it. I recently talked with the team at an Intel Capital event in San Diego, when one of Ardica’s angel investors suggested I meet an engineer behind the project. Fortunately for me, the research is far enough along that the company is speaking publicly about the initial product, recently posting a demo video on YouTube.

Ardica is onto a huge opportunity if (and that’s a big if) it can execute on its ambitious goals and manufacture enough of the batteries to meet potential demand.

From the military to the average Joe

Ardica primary users so far are soldiers who have an “unmet need for power,” according to the company’s director, serial entrepreneur and University of California, Los Angeles, professor Jeff Scheinrock. The military frequently send people on off-the-grid missions that take days, even weeks, without contact with another group or an opportunity to restock their supplies.

Ardica chief technology officer Tibor Fabian said the military product, dubbed the WFC20, can reduce a soldier’s load for a four-day mission by up to 17 pounds. “We have combined the newest concepts in fuel cells with high-performance energy-storage material,” he explained in a video highlighting the research.

The military is notoriously secretive about its technology, so Ardica has kept much of its research private. However, we heard some buzz about the company in 2009, when this technology found use in a battery pack-powered system that retailers could build into heated jackets.

Fabian is currently working on a smaller, more consumer-friendly product, a battery pack that is light enough to fit in a handbag or briefcase. The goal is to bring it to market by 2015 and sell it for less than $10 per pack.

Above: The consumer product will be light enough to fit in your briefcase or handbag.

Ardica’s team believes it’s possible to achieve 1,200 to 2,000 watt-hours per liter of energy density, which is three to four times the performance of today’s rechargeable lithium ion batteries.

Scheinrock describes the results of recent pilot tests as “promising.” He told me that Ardica is currently developing a working prototype to showcase to select manufacturers in December 2013. The startup will spend another year or two refining the technology, striking partnerships with vendors, and ironing out any regulatory issues.

Scheinrock showed me a video of the not-yet-released technology in action. It shows a close-up of the military product, which can replace 30 AA batteries at a fraction of their weight. The company released a shorter version of this video (it’s at the end of this story).

Above: The consumer product takes the core military technology and makes it simpler

Scheinrock also runs a software development and investment firm called Originate, which (among other things) connects engineers to fast-growing startups. Cofounder Fritz Prinz  is the Robert Bosch Chair of Mechanical Engineering at Stanford University and is one of the most well-respected materials-science experts in the world.

“We have intellectual property protecting our system and design,” Scheinrock told me. “The fuel that powers the cell is the secret sauce, [and] we have a patent on that.” Ardica has raised some $15 million in investment from a variety of sources to fund this research.

When will this technology fuel our devices?

For Apple, Samsung, LG, and the rest, this technology could prove to be a huge competitive advantage. Many of us would rush to stores to scoop up a device with Ardica’s technology.

Ardica wouldn’t reveal much about its go-to-market strategy, but it hinted that it will work with numerous manufactures.

It’s not just smartphones and tablet makers that could benefit from an Ardica fuel cell. One of the biggest hurdles for emerging technologies, such as drones and wearable devices, is battery life. And medical device manufacturers could use this fuel cell tech to build more efficient pacemakers, glucose meters, and so much more.

Still, Michael Kanellos, the vice president at Eastwick, a contributor at Forbes, and a former editor-in-chief of Greentech Media, had two words for Ardica: “Good luck.”

“Many have tried. None has succeeded. Portable fuel cells are the boulevard of broken dreams,” he said.

However, Kanellos is confident about the team’s ability to deliver, particularly Prinz.  “If he has come up with a new type of membrane that lasts long, doesn’t get fouled, and can be produced inexpensively, they might have something here,” he said.

Can Ardica succeed where others have failed? Check out the video below to learn more, and let us know your thoughts in the comment section below.