The companies, all of which have been scooped up in the last year or so, are all a part of former Android boss Andy Rubins’s new Google robotics venture, which was unveiled earlier today.

After taking a closer look at some of these companies, one thing becomes clear: Google’s robot vision is as diverse it is ambitious. But the companies all point to Google’s final goal: to create a smart, mobile, dexterous robot that can work alongside — or in place of —  humans. It’s the type of moonshot that companies like Google — and, indeed, Amazon — have gotten particularly good at making,

Here’s a closer look at who Google acquired to help make its future “GoogleBots” (our name — not Google’s).

Lead by a small team of Japanese roboticists, Schaft’s humanoid robot aims to fix one of the central problems facing most robots so far: They aren’t very strong. Core to that ambition is Schaft’s water-cooled, capacitor-powered motor system, which makes robots stronger while keeping them compact.

On the software side, Industrial Perception focuses on helping robots more easily locate and identify objects around them. This capacity is ideal for tasks like unloading trucks, where robots need to know both what to grab and how to get to it most efficiently. 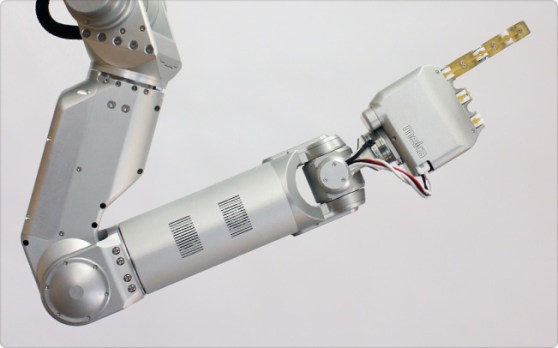 Also taking a look at industrial robots is Redwood Robotics, which is working on the next generation of robotic arms. A joint venture between West Coast-based Willow Garage, SRI, and Meka Robotics (which Google also acquired), Redwood Robotics says its goal is to use robots “to reduce the stress of dull and repetitive tasks.”

Redwood Robotics shares much of its automation ambition with Bot & Dolly, which uses robot arms for what it calls “cinematic automation.” The company’s biggest claim to fame is that it helped film this year’s blockbuster Gravity, which might not have been possible to make without Bot & Dolly’s work. (Read our previous story for a more in-depth look at the company’s system.)

Alongside Bot & Dolly, Google also acquired its sister company, Autofuss, which focuses on advertising and design.

Meka Robotics specializes in robots that work alongside humans at home and at work. The company is perhaps best known for its M1 Mobile Manipulator, a $340,000 robot equipped with two arms, a Kinect sensor, and an omnidirectional wheel base. The company has also experimented with more social robots via the s2 Humanoid Head, which is aimed at researchers looking at human-robot interaction.

One company we don’t know too much about is Holomni, which creates small omnidirectional wheel and vehicles. The company’s web presence is slim and limited almost exclusively to its half-hearted website. Whatever they’re working on, Google must think it’s something special.