Fiverr, the self-pronounced leader of the “gig economy,” is going mobile.

The freelance service marketplace has announced its first iOS app, which lets users buy and sell one-off services regardless of their location. 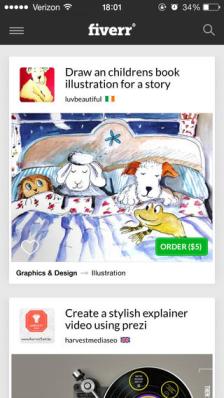 Above: Fiverr jobs, which come in many, many forms, start at $5

Fiverr CEO Micha Kaufman says the new app is a big first step for the newly mobile Fiverr, which has been desktop-focused since its launch in 2011. With the app, users have a much more effective way to connect with others, particularly for jobs that require a quick turnaround.

And this is just the beginning. Fiverr plans to introduce more mobile-specific products down the line, including an Android app next year.

Ultimately, all of this is great news for Fiverr’s sellers, who benefit most when Fiverr makes it easier for buyers to find and pay them. Kaufman says the gig economy will generate billions of dollars in a few years, and smartphones will be a big part of it.

“Mobile will accelerate the booming freelancing market, and we believe we are at the forefront of this movement,” he told VentureBeat by email.