For the first time in more than 15 years, America is on track to install more solar capacity this year than world leader Germany.

This news emerged out of a quarterly report from GTM Research and the Solar Energy Industries Association (SEIA) on the state of the solar power market in the U.S..

“Without a doubt, 2013 will go down as a record-shattering year for the U.S. solar industry,” said Rhone Resch, SEIA president and CEO. “We’ve now joined Germany, China, and Japan as worldwide leaders when it comes to the installation of new solar capacity. This unprecedented growth is helping to create thousands of American jobs, save money for U.S. consumers, and reduce pollution nationwide.” 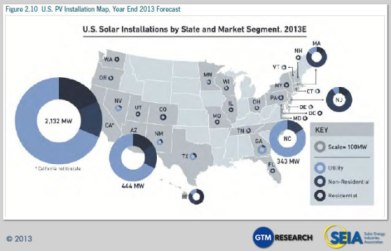 The U.S. installed 930 megawatts (MW) of photovoltaics (PV) in Q3 2013, up 20 percent over the second quarter and 35 percent from the third quarter of last year. Residential PV installations were up 45 percent year-over-year. Residential was the main driver of this momentum, as the non-residential market limped along by comparison.

Resch said this progress defied expectations and that we are just scratching the surface of the solar industry’s “enormous potential.”

Solar is now the second largest source of new electricity capacity in the U.S., behind natural gas, and GTM estimates that by the end of 2013, more than 400,000 solar projects will be operating around the country. A new solar project is installed every four minutes in the U.S.

California is the nation’s leader when it comes to solar, followed by Arizona, North Carolina, Massachusetts, and Nevada.

This success partly stems from legislative and regulatory activity, such as net metering decisions and new solar deployment programs. It is also thanks to advancements in solar technology, which brought costs down, and innovative new forms of financing that make  going solar more affordable for consumers. Companies like Vivint, SolarCity and SunRun have all raised upwards of $500 million to finance residential solar projects around the country.

Considering observed concentrations of carbon dioxide in the atmosphere passed an alarming threshold earlier this year, progress can’t come soon enough. But progress does seem to be happening — the Department of Energy recently released a report which said that U.S. emissions of greenhouse gases from the burning of fossil fuels was lower last year than at any time since 1994.

This reflects a downward trend in America’s CO2 emissions, which have fallen five out of the last seven years. Alas, global emissions continue to rise. Thanks, China.