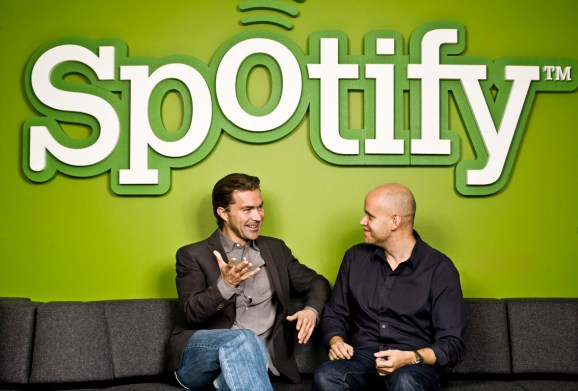 NEW YORK CITY — In its quest to entice more users, Spotify is finally bringing its free music service to more devices — though they won’t all get the same free content.

A new ad-supported offering will let you listen to music for free on the iPad and Android tablets, the company announced at a press event in Manhattan today. Additionally,  smartphones now have access to a new shuffle-based radio streaming feature for free, which also has ads. (The shuffle play feature functions just like it sounds: it doesn’t let you choose specific songs, but you can still listen to entire playlists and artist libraries, which is more than Pandora offers.)

Previously, you could only listen to music on Spotify’s mobile apps by subscribing to its premium service for $10 a month.

“What’s fantastic is that we’ve really become synonymous with the idea that access has become the leading model to enjoy music,” Daniel Ek, Spotify’s founder and chief executive, said on stage today.

Ek also announced that Spotify has landed exclusive streaming rights to Led Zeppelin’s entire catalog (a score that may convince many users on competing services to jump over). Additionally, Spotify is rolling out to 20 new markets today, which brings its total coverage to 55 markets.

The two different free solutions seem like an obvious compromise for Spotify, which was rumored to be in deep negotiations with record labels for months to open up more content for free. For its tablet apps, the company is betting that you’ll be listening right at home, just like on a PC. But for listening on the go with your smartphone, you get a significantly dumbed down experience. Still, being able to shuffle entire playlists for free is more than any other music service is offering right now.

Both new free services are launching today. The company’s $10 premium offering remains unchanged: It gives you full access to Spotify’s music library on all of your devices, as well as higher quality audio and the ability to save tracks for offline listening.

“We don’t want to make another radio type service. … We thought about this long and hard , then we saw it, it was so obvious … the most popular way that most mobile users listen [was through shuffle],” Ek said. “In order to truly go mobile, we also decided to do something that may sound a bit radical, but makes perfect sense.”

Ek noted that Spotify members have streamed more than 4.5 billion hours in the last year, and they’ve also created more than 1.5 billion playlists (with 1.5 million being created every day). He didn’t discuss any new user figures, but the company said earlier this year that it had around 24 million monthly active users and 6 million paying subscribers. Spotify recently announced that it has paid out more than $1 billion to artists since 2009, or around 70 percent of its total revenue.

Spotify reportedly raised a $250 million round recently, which values the company at more than $4 billion.