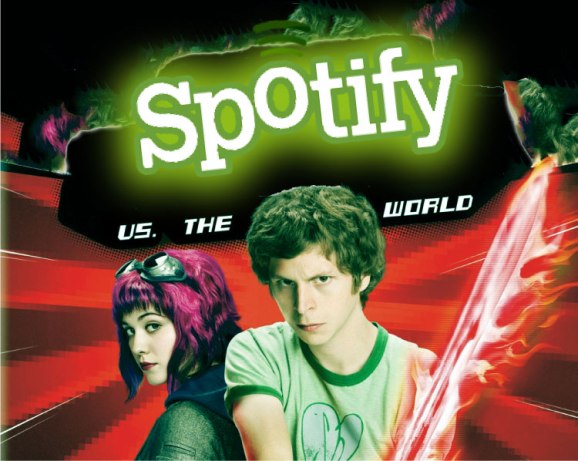 Spotify is sitting on top of the world. With 24 million monthly active users, 6 million paying subscribers, and $538 million (not a typo) in venture funding, it’s the dominant streaming music service in most of the English-speaking world.

But if Internet history teaches us anything, it’s that even the most successful-seeming online music companies can evaporate almost overnight. With that in mind, here’s what the company is doing to ensure dominance.

Spotify vs. the competition

Spotify just reinforced its position as the leading streaming music service with the announcement of a free version of its service for smartphones and tablets. Spotify was primarily focused on competing with other top-tier, paid music services in the past. This move pits it against free services like  iTunes Radio and Pandora in some ways — as well as giving it a leg up on Rdio, Slacker Radio Premium, and other paid services.

As VentureBeat’s Devindra Hardawar previously reported, Spotify’s free service for mobile devices is limited, but in a way that’s different from rivals. Tablet and smartphone users on the free service won’t have the option of on-demand listening to whatever tracks they choose, but they will be able to create custom smart “radio stations” from playlists, artists, or genres. That makes it equal to the free versions of Pandora and Apple’s iTunes Radio in terms of functionality.

Spotify’s free service for tablets also goes a step further by letting people listen to stations that contain music from a single artist. Rdio, which debuted its own free radio service months ago, also offers stations that play only songs from a single artist, but you must be a paying customer — giving Spotify the edge in this feature. (The same is true for Slacker Radio’s free tier.) And Google’s All Access music service doesn’t offer a free tier at all, making Spotify the better choice if you don’t plan on spending any money.

Spotify vs. the future

“[Free mobile service] was something Spotify was always going to do eventually. But the timing and expanded music selection options show that Spotify is making a bold decision to keep itself on top before competitors like Beats Audio and YouTube appear,” said Ryan Aynes, cofounder of music marketing company EDGE Collective.

While we don’t know exactly how Beats Audio’s forthcoming music service “Daisy” or the rumored YouTube music service will stack up against the likes of other music services, both will most likely have an on-demand element and a free tier that’s accessible from mobile devices — if only because (until now) Spotify didn’t offer free access on mobile devices. (There’s no shortage of music services, but newcomers will have to present something to consumers that Spotify and the others don’t if they expect to gain any traction, and Spotify’s new free service makes it that much harder for newcomers to stand out.)

“Whoever holds the most consumers holds the power to set the standards, everyone else follows. Spotify just did this with its artist-only listening for tablet users, and now everyone else has to scramble to catch up,” Aynes said, adding that it won’t be an easy task.

Spotify may be generating revenue from advertising, but its business model is still geared towards adding more subscribers. Future competitors — or even existing competitors wishing to one-up Spotify — will need to provide a free tier of service at a minimum. Those other services will also be tasked with figuring out how to pay the hefty licensing fees for free users while waiting for a portion of them to convert to paying customers.

Another big thing Spotify is banking on with its ad-supported mobile listening strategy? Converting those free listeners to paying subscribers.

“I still get the sense from a lot of people that Spotify is primarily a desktop music solution, but not for listening to music on your smartphone at work,” said Marc Ruxin, CEO and founder of music curation (and streaming service-agnostic) startup TastemakerX. “Spotify adding free access on smartphones [and tablets] gives it a huge opportunity to add subscribers.”

Spotify has successfully grown paid subscriptions in the past because it provided a free, ad-supported service of its on-demand music library for desktop listeners. You could listen to any song, any time, for free — as long as you were using a notebook or desktop PC. Its previous business model treated the ability to use Spotify on mobile devices as a perk for those who signed up for the premium option. But that history means people who only listen to music via mobile devices, and who don’t fancy paying for their music, don’t count Spotify as an option. Changing that perception will be job No. 1 for Spotify now.

But the company realizes you won’t buy the musical cow if you can get the milk for free. That’s why Spotify’s free service on smartphones is only as good as everyone else’s, while its tablet app is slightly better than its rivals.

Spotify vs. the gradually opening wallet

Spotify is banking on a portion of its free users eventually signing up for its $10 monthly subscription, after they abandon rivals like Slacker Radio and Rdio. Why will people abandon the competition? Because Spotify’s mobile apps now offer something the others don’t: a greater ability to shuffle custom playlists and single-artist libraries, depending on the device.

But what about competing for customers who are willing to spend money?

There are a few big reasons people would spend money on a “free” music service. The first is to eliminate commercial interruptions.

Pandora already offers an ad-free experience across all devices for those willing to spend $5 per month, which is half the price of Spotify’s subscription.

Apple’s iTunes Radio is a tad more reasonable, as those who want an ad-free experience can spend $25 for an annual subscription to the company’s iTunes Match service, which lets you download and stream virtually your entire music library via iCloud. But fans of obscure bands or live concert recordings (pretty much anything that can’t be identified in the iTunes store) will need to purchase additional storage on iCloud.

Can’t seem to get a playlist based on a favorite artist? Apple is hoping you’ll go ahead and purchase an album on iTunes, which costs about $10.

However, Spotify is also hoping you realize that for the same price you could gain access to an entire library full of music, on Spotify, for a whole month.

Spotify vs. the lack of older ears

Pretty much everything I’ve mentioned so far has been related to Spotify’s mobile push, but there’s another strategy the company announced yesterday that’s just as important: exclusive content.

The exclusive content game is something streaming video services know very well, but so far the music industry has stayed more or less clear of it. However, as of yesterday the only place you can stream the entire library of Led Zeppelin music is Spotify.

Of course, you can still purchase Zeppelin tracks on iTunes, and you can even create a custom artist station on iTunes Radio. Yet that station won’t actually play any Led Zeppelin songs, just Led Zeppelin-esque music by other artists (I know this because I tried). But it remains to be seen if holding an exclusive on the Zepp will win Spotify many new listeners.

“Sure, it’s possible that Spotify will gain attention from an older crowd of listeners — people who may have never heard of Spotify or any of the other newer streaming music services,” TastemakerX’s Ruxin said, referring to the service’s low usage among adults 35 and older. “Typically, classic rock fans are very album-oriented, so it’s possible that they would subscribe (to Spotify) once they realize the value.”

On the other hand, Ruxin predicts that exclusive deals like this are mostly a marketing ploy that only work for a little while, especially since the rights holders don’t benefit by keeping their licensed songs on one service for a lengthy time. In other words, it’s only a matter of time before Led Zeppelin shows up on other streaming services — once the exclusivity contract with Spotify runs out.

He also points out that Spotify isn’t using classic content to hook people into its own originally produced content — setting it apart from the strategy used by video services like Netflix, Hulu, and Amazon Prime.

In light of many lesser-known/indie artists raising awareness that Spotify doesn’t generate much revenue from licensing fees, Spotify is attempting to make itself valuable in other ways.

For instance, the company is rolling out a new “artist dashboard” that provides a centralized place for rights holders to view analytics on those listening to their music. The dashboard also features integration with other music business-focused tools and services for promotion and selling concert tickets and merchandise.

While we don’t really know if Spotify’s on-demand paid service cannibalizes digital music sales for some of those artists, the company’s expanded free mobile tier (which isn’t completely on-demand, as previously explained) shouldn’t be any more of a threat to sales than other free radio services. And with the tablet version of Spotify allowing listeners to shuffle between a single-artist’s song library, listening analytics from the new artist dashboard should be more relevant in theory.

If the dashboard helps artists track, grow, and manage their business dealings, then the meager licensing fees might not be as much of an issue. But, of course, it’s still too early to tell if this will prove successful.