As an investor, barely a day passes that I don’t hear a pitch from a bright, ambitious, woman founder addressing anything from dementia care to easy connectivity for the Internet of things. Again and again, they say they’d rather work with a female VC, rather have women advisers and board-members. I’m frequently told that they would prefer to collaborate with other women in a single-gender setting.

For the first time in a long tech career, I’m starting to think they have a point. That’s big for me: I’ve always fought the assertion that women need to separate themselves in order to thrive.

Landing in tech fairly early — I joined Apple in 1981, and launched the company’s first online presence — I have felt very fortunate to ride a wave of unbridled opportunity. Sure, I was in the minority gender most of the time. But things moved so fast, one I didn’t make time to notice. I blazed my own trail as if the challenges of being female in a male-dominated industry didn’t exist.

I might have been naïve about that. And that’s never a good way to be.

Take this story.  A few years back, I crossed paths with a guy on a street in Palo Alto. We were wearing the same T-shirt — mementos of a recent Google offsite — and we pointed at each other.

“Googler?” we asked in unison.

“Yup,” we both answered.

Sure, he slapped his palm to his forehead and apologized 10 different ways. I laughed it off, but took the lesson: I had been typecast. How he’d seen me, what he’d assumed, didn’t actually describe me. And if he was doing that, surely others were too.

At a recent meeting, I was the only woman in a room of 12. One of the guys there knew my business partners, who happen to be male. “What do you do for them?” he asked.

“For” is a very different word than “with.”

I recall this VentureBeat article, where Knotch founder and full-stack engineer Stephanie Volftsun spoke about leaving a job at a respected tech company. Gender played a role, she said: “It was harder to gain the same level of respect my male peers had.” She left to launch a startup (with two other women), freeing herself of the barriers she feared facing if she accepted a job on another largely-male development team.

It’s hard for me to admit that gender impacts the world I work in, though evidence suggests I’m wearing blinders. Women represent less than ten percent of venture capitalists, according to the Kauffman Foundation. Per Pitchbook, only 13 percent of first-half 2013 venture investments went to women — a low number, and a slow climb from the paltry 4 percent a decade ago.

These are frightening facts. In tech, where success depends on tapping a full spectrum of creativity and intelligence, what are we sacrificing by creating any resistance to the rise of innovation?

We all deserve better, and I don’t believe that separating ourselves is the only solution.

What are the next steps?

First, consider that labeling people and making assumptions about them might be a form of psychological projection. If your mind jumps to judgment — and admit it, most of ours do from time to time — look deeper and see what’s at the core of that judgment.

Second, remember that we’re all in this pickle. This “less than” thing is big in our culture, and a lot of men feel it, too. I’ve had several guys, co-workers or founders I’ve worked with, tell me that they get put down too. One guy talked about feeling inadequate because he hadn’t had that star-spangled exit. He protected his own sense of identity by slamming others – not just women, but anyone who seemed different than him. This was a popular, “alpha” guy, the one smiling biggest in the group picture. Yet he felt like his surest way of rising up was to push others down, and he did that by putting others into boxes that let him see them as weak, lesser-than, likely to fail. “Girl” was one of those boxes, and he lost a killer co-founder because he couldn’t let her win.

Next, understand — whether you’re a woman or a man — why women feel the need to separate themselves in order to gain full footing. By all means turn to those all-female groups or gatherings and rely on them to get the foundation you need. But don’t stay there.

If you’re a man who works largely with men, ask yourself what you gain by surrounding yourself with people who may think too much like you do. A journalist I admire says that he dreads going to all-male startups. They tend to present only one view (the one where they’re right), he says, and reinforce each other’s statements rather than explore critical thought. He reports it’s very different when there’s a woman on the team. How might this myopia limit a vision? And can any of us can afford a limited vision? Surround yourself with too much homogeneity and you might end up in an echo chamber. That’s a sure way to make the conversation get less meaningful over time.

Finally, give yourself a killer advantage: break the old rules. We live in a place where disruption of outdated ways moves us all forward and creates measurable wins. It might have once worked, somehow, to believe we were “more” if we labeled others as “less,” but that’s legacy architecture – and why use an AN/FSQ-7 when you can use an iPad AIR?  Metaphor notwithstanding, its time to leave the old junk behind.

The thinking that told us that winning was based on making others lose is obsolete, and the sooner we figure that out the sooner we’ll align ourselves with the best talent, vision, passion, and insight, regardless of what kind of package they ship in.

My two first lessons taught me something about assumptions. This next one is about breaking through them.

At that same meeting where someone dropped the F (“for”) bomb, the guy sitting to my right – a young founder of an awesome startup – quietly asked me a serious question: “What’s it like being a woman in this room?” I had no real answer, but I liked the question. We started to talk. He told me about things he heard when only men were in the room, the way the female founders in his incubator all sat together, his fears that he wasn’t preparing his two daughters to navigate whatever future they wanted for themselves, free of artificial boundaries. We talked about attributes that were core to all of us, and the challenges men felt with the roles that they, too, get pushed in to.

We ended the conversation agreeing to meet again, and not only so that I could hear what’s next with his startup. We struck an accord where we each expanded our perspectives and saw things from a new angle.

Given all that I’ve seen in a career in tech, nothing fuels success better than that. 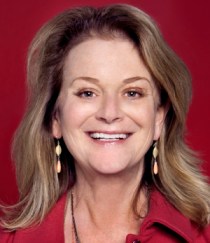 Her work with entrepreneurs in the US, Europe, Africa, and Latin America informs her views on tech’s role in driving global change.