The Singapore government has invested $500,000 in funding in a new health care startup called Ring.MD.

VentureBeat exclusively learned that the startup raised its funding from Singapore’s National Research Foundation, which offers financing to brilliant young scientists and researchers.

Ring.MD was founded by a 21-year-old entrepreneur called Justin Fulcher. Fulcher has been coding since the age of seven and started his first business as a preteen.

With his new venture, Ring.MD, Fulcher is hoping to improve access to high-quality physicians in Asia. Ring.MD lets anyone connect for an audio or video call with a doctor — or you can opt to send a message through the secure system. Patients only pay for the amount of time they need.

Fulcher said he chose to base the company in Southeast Asia rather than Silicon Valley to escape the “bubble” mentality.

The company is launching this week with about 100 doctors signed up to the platform. According to Fulcher, these physicians were selected due to their superior credentials and strong peer reviews. The majority of the first set of doctors are based in Singapore, but the company plans to expand its reach throughout Asia — and eventually to the United States. It will eventually need to compete with rivals like Doctor on Demand, which offers access to physicians anywhere and anytime for a $40 video consultation. 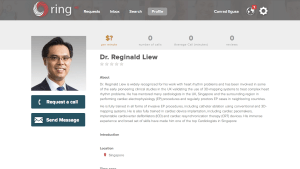 Ring.MD’s website is fairly simple to use — it’s impressive given that the company only has eight employees. Just type in a symptom, like “bad cough,” and you’ll see a shortlist of doctors with the most relevant experience. You can then request a call with one of these physicians for a specified cost — usually about $3 or $4 per minute. The service is HIPAA compliant, meaning that Ring.MD meets the necessary regulatory requirements around security.

This price may soon drop, as the company says it is forging partnerships with insurance providers. It won’t be an easy feat, as there are thousands of different insurers around the world, and not every provider is sold on video (rather than in-person) consultations.

The company also plans to use the funding to build iOS and Android apps, so you can connect with a doctor from a smartphone.