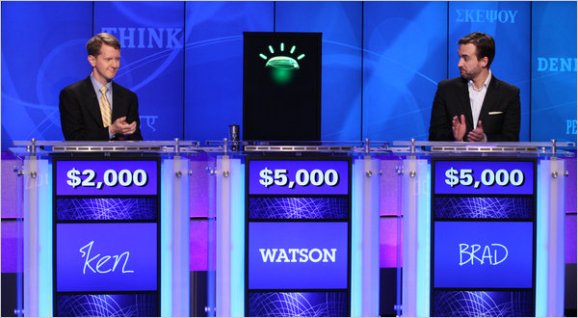 IBM today pushed off in a new direction of generating lots of business around its Watson computing technology, forming the Watson Group business unit and pumping $1 billion into it, with plans to staff it with up to 2,000 employees. The efforts could help make the company look more with-it as it faces challenges in some other parts of its business.

The group will release software, services, and applications that can think, answer users’ questions, and improve over time by getting more and more data.

Speaking at an event in New York this morning that IBM streamed online, Ginni Rometty, the company’s chief executive, announced the news, as well as $100 million “to fund the ecosystem” of entrepreneurs building applications with Watson and a new headquarters for the group in Manhattan’s East Village neighborhood.

With this move, IBM could be trying to reposition itself — as the enabler of a futuristic type of computing to solve challenging problems. It’s less about hardware or software and more about an experience, or a special sauce for businesses, through the power of brain-like “cognitive computing.”

If IBM can manage to get the public to buy into that new image, it could get observers to stop talking so much about the challenges its cloud strategy is facing and its faltering server business.

By making these investments, IBM is looking to gain much more from the mileage it’s gotten out of Watson appearances throughout the years, including a victory on Jeopardy in 2011. And it’s a big step forward from IBM’s announcement in November of plans to make Watson available as a cloud platform with which developers can construct applications.

Already, IBM has succeeded in getting some considerable companies to work with it on Watson.

Kent Deverell, chief executive of the e-commerce software company Fluid, talked at today’s event about the value of a Watson-powered “expert personal shopper” that can respond to online shoppers in a more human way.

Terry Jones, a cofounder of travel e-commerce sites Travelocity.com and Kayak.com, said existing sites lack the ability to answer complex questions and correctly handle a person’s specific directions. “What if you could say, ‘I need to be in Fargo tomorrow at 8 a.m.’?” he said.

Executing on that statement would be “a revolutionary change in customer service,” Jones said. “That’s something Watson can do.”

DBS Bank of Singapore has signed an agreement to use Watson to improve wealth-management advice, an IBM executive said. And representatives from the Cleveland Clinic and the Memorial Sloan-Kettering Cancer Center talked about how they’ve been partnering with IBM on Watson applications for health care.

And IBM named a few products that will go inside the Watson Group. Some of those products, like those for business analytics data integration, already exist and are merely being renamed. Others, like Chef Watson and the Watson Engagement Advisor have been announced previously.

At today’s event IBM launched Watson Analytics, a tool that accepts search strings in ordinary language and shoots back data sets that users can select for visualization.

IBM also revealed the Watson Discovery Advisor, a program for going through rich content such as journal articles and studies to spot connections in various texts that would otherwise remain hidden.

And for companies that wish to take account of the stockpiles of data they have before setting out on a big data project, the new Watson Explorer shows a single view of all information available for analysis.

Many of these technologies sound slick. They make IBM look innovative. The legacy technology vendor will now have to focus on talking lots of companies into paying for and using this stuff.