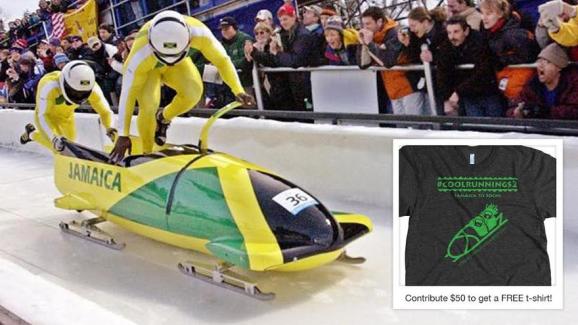 Feel the rhythm, feel the rhyme, get on up, it’s crowdfunding time.

The Jamaican bobsled team has raised nearly $130,000 on Crowdtilt so it can compete in the Winter Olympics in Sochi, Russia. Contributions made using the Bitcoin alternative Dogecoin made up $30,000 of this funding.

In a real-life story that will unavoidably be known as “Cool Runnings 2,” the Jamaican bobsled team qualified to compete in the 2014 Winter Olympics. But it didn’t have enough money to get there. Just like the movie, the Jamaica Olympic Association offered little in the way of assistance, and the team members had to get creative with fundraising.

This is team captain Winston Watts’ third Olympics. He last competed in the Salt Lake City Games in 2002, which was also the last time the Jamaican bobsled team qualified for the Winter Olympics. Watts is 46 and decided to come out of retirement to take a shot at racing in Sochi in Russia, along with partner Marvin Dixon.

But unlike their legendary predecessors from the 1988 Calgary Games, this Jamaican bobsled team can use the Internet to raise money.

A fan named Lincoln Wheeler created a crowdfunding campaign for the team on Crowdtilt, a crowdfunding platform, and the campaign took off. The team’s president, Chris Stokes, and Cool Runnings founding team member Devon Harris reached out to Wheeler and made Wheeler’s Crowdtilt campagin the team’s official fundraiser.

In yet another twist, Jamaican Olympic officials announced yesterday that they would cover all the travel costs for the team. All the money raised from the Crowdtilt campaign will fund the purchase of jackets, equipment, and expenses over the weeks of training time.