This sponsored post is produced by Leo Leung, the VP of product at Oxygen Cloud.

File servers have been an IT building block for decades, and more than 27 million of them are still in service. The problem is they’ve stayed the same with regard to file sharing. As Enrico Signoretti, noted storage blogger, has said, “File servers and traditional network sharing protocols, like SMB, were thought up for the LAN and not for the WANs nor for the Internet.”

More than one-third of people now work remotely, according to IDC, and that number is growing fast. Being remote or offline usually means you can’t get to the file server or the files you need. This has forced workers to e-mail themselves, use USB drives, or migrate data to various cloud storage services.

File servers still have all the data — why move it?

In the latest studies from the University of California at San Diego’s Global Information Industry Center, enterprise servers process almost 10 zettabytes of information a year, or 3 terabytes a worker a year. Servers are still the workhorse of most businesses and hold all of the critical data. Well-tested methods of management and data protection have been built around the file server. Many content creation, editing, and review-file workflows have been built around the file server. If you wanted a better access experience, wouldn’t it be ideal to keep the data in place and still get that experience?

Dropbox has taught millions of users that sync is a great user experience for getting files. You don’t have to think about moving things from one machine to another — they just appear by themselves. Collaborators don’t have to think about where to go to get shared files — they just go to their sync folder. But Dropbox, and most cloud services, have been built mainly for individuals. They make it hard to use and control large amounts of content, and they add cost by moving the data to and from another location.

To avoid migration, to avoid the slowness and uncertainty of moving the files far away, and to avoid the extra costs, you would want to install sync software on your file servers. Now, a great sync experience, optimized for server-scale, is finally possible.

odrive installs on your file servers, lets you invite people with a simple e-mail, and connects users with all the content they need, right on their desktops. odrive was built by a bunch of folks who have delivered business file-sharing services and storage for nearly a decade. You can try odrive here. 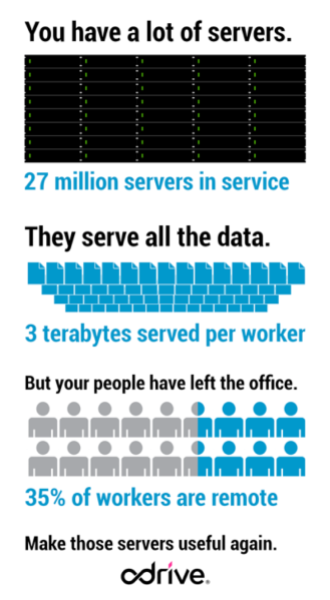 Leo Leung left EMC after seven years and joined Oxygen Cloud to change the world as the head of products and marketing. At EMC, Leo built one of the first enterprise cloud storage services and had senior roles working on service provider platforms, media technologies, high-performance NAS, peer-to-peer storage, grid computing, and iSCSI. With a background as a strategist and product manager, Leo blogs frequently about technology and the fundamental disruption that the cloud is creating. Follow Leo on Twitter @lleung