America envisions itself as a beacon of democracy for the world, but we have some pretty major issues with our democratic system at home.

iCitizen is a startup with the ambitious aim of strengthening our democracy through a mobile app. The company has raised $3.3 million to date and is growing fast. 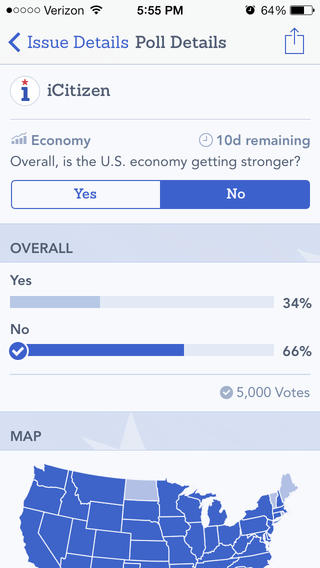 iCitizen keeps track of political issues you care about and what your elected officials are up to, making it easier to stay up to date and voice your opinions.

The company said its daily polls regularly draw over 13,000 votes.

The Pew Center found that nearly two-thirds of Americans participate in some form of political activity a year and that 13% take part in five or more activities. However, getting involved is time-consuming. You have to learn about a topic, stay up to date on elected officials, news, and legislation, and connect with other supporters.

As a result, many voters have minimal interaction with the political process outside of elections every 2 to 4 years.

iCitizen wants to heighten this engagement and inspire action by monitoring and delivering relevant information to your phone, and opening up channels for communication.

People choose from 18 different issues to follow when they sign up, such as education, gun rights, taxation, women’s health, etc. iCitizen will track relevant news stories and political activity relating to those issues.

The app also prompts you to select and rate your representatives at the federal and state level. It will then track all relevant activity from those representatives and show you what bills they are voting on. You can express your support or opposition in the app and voice your opinion on questions like “is the economy getting stronger?”

For officials, iCitizen provides a quick and easy way to tap into the opinions of constituents.

One of the challenges for apps like iCitizen is achieving a critical mass of constituents and lawmakers — a significant amount of both are necessary for success. Without enough constituents, lawmakers won’t take the polling seriously. Without enough lawmakers, people won’t feel like their opinions are being heard.

iCitizen launched in November, and its iPhone app has been downloaded more than 200,000 times, with an Android app in the pipeline.