Humans have an impressive ability to amass stuff, which can be troublesome if you live in a small apartment.

Boxbee is a startup defining urban storage. It won the prize of “Best Overall Winner” at the 2013 Launch festival, beating out dozens of other companies.

Since then, the company has been evolving beyond the prototype stage. VentureBeat caught up with founder and CEO Krisoph Matthews to find out what Boxbee has been up to and what lies ahead.

“At Launch we were using cardboard boxes for storage and Task Rabbits for shuttle services,” Matthews said. “That worked well as a proof of concept, but now we are investing a lot of resources into building a real logistics structure. We are bringing everything in-house, from the transportation with our own branded vehicles to our own warehouses and storage space. This means we have complete control, which means a faster turnaround time for our customers.” 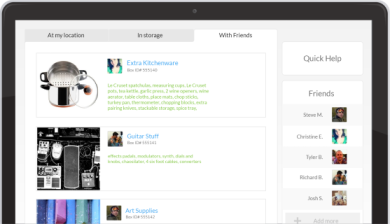 When you sign up for Boxbee, the company will deliver storage boxes to fill with your stuff. You create an inventory on Boxbee’s website of what is in what box and then schedule a pickup. The boxes then go to Boxbee’s secure locations. Whenever you want something from storage, you log in, indicate what items or boxes you want, and Boxbee will deliver it within a couple of hours.

Self-storage is a $24 billion industry. One in 10 people in America own a storage unit, and there are 48,500 facilities across the country. The Self Storage Association claims that it is the fastest growing segment of the commercial real estate industry over the last 40 years.

“Traditional storage is disorganized and unpleasant — you have to own or rent a vehicle, drive to the unit, waste time finding whatever it is you are interested in, close up the unit, and drive back. Nobody likes this,” Matthews said. “I see Boxbee as being in the business of making urban life more convenient and efficient.”

Matthews said he has always been “in love with logistics.” He used to work in semiconductor manufacturing and dealt extensively with supply chains. He has also moved 22 times over the course of his life, and so he’s well acquainted with the world of self-storage.

He said that Boxbee is at its core a logistics company, and its success hinges on being able to maintain “scaleable, highly efficient operations.”

“Boxbee is a business that seems extremely simple, three steps: send boxes, pack them, [and] take them to storage,” Matthews said. “But there are hundreds of logistical steps that need to happen for this to work. It combines tech with an offline component which introduces a lot of unpredictabilities.”

Boxbee is now active in San Francisco and New York City, and it stores 5,000 boxes. Boxes cost between $6 to $10 per month per box, depending on location. Pickups are free, and retrieving a box costs $15 plus $2 per box.

Boxbee debuted a “sharing library” in December that enables people to share things they have in storage with friends and colleagues.

“Boxbee users are already filling out what they are storing with pictures, so we have this database of things being stored and the logistical infrastructure to deliver things fast,” Matthews said.”This feature is a natural marriage of those two things. With our infrastructure we can take advantage of fluctuations in demand and use those for deliveries. This is a last mile logistic problems that needs to be solved.”

Boxbee is based in San Francisco.