After cracking down on Rap Genius and Expedia, Google has a fresh target: Vivint, a multibillion dollar security firm.

Acquired by Blackstone for $2 billion in late 2012, Vivint is famously controversial. Key to Vivint’s infamy, according to the Better Business Bureau, are allegedly misleading and aggressive sales practices. The company, which offers video surveillance, home automation, and solar energy products, has faced legal action from numerous state and local prosecutors.

These controversies aside, it’s noteworthy that details shared with VentureBeat by Mike Templeman of Foxtail Marketing did not imply that Vivint has employed blackhat SEO tactics.  [Disclosure: Mike Templeman has contributed stories to VentureBeat.] Templeman shares that the potential cause stems from a massive increase in “banner and affiliate links” — up 19 percent over the last month, as pictured below. 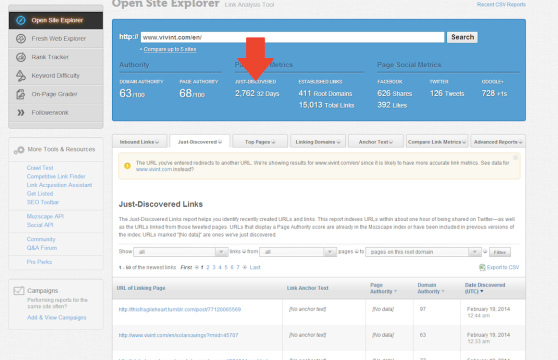 Regardless of cause, this is a major hit for Vivint. Google adjusts its rankings constantly, but the search giant’s wrath is not often reserved for multibillion-dollar companies.

Currently, only Google has taken action against Vivint; the firm’s rankings on both Bing and Yahoo haven’t been affected. Only results from vivintsolar.com, a separate domain owned by Vivint, is displayed. (See below) 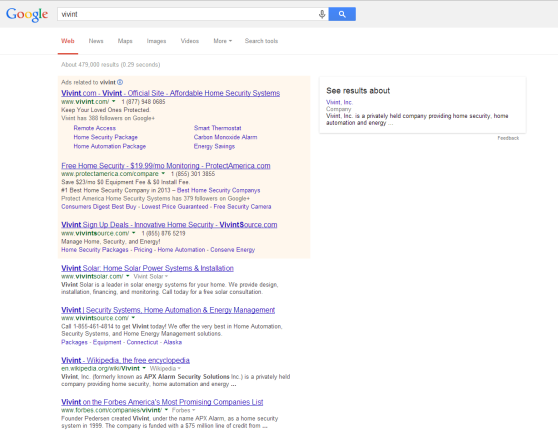 When questioned about this incident, a Google spokesperson refused to address it directly:

“We typically don’t go into details on specific sites, but we’re always working to improve the quality of search results for our users.”

It’s unclear how far Google’s streak of crackdowns will go, and similarly, it’s unknown how Google’s actions will affect startups and massive companies which are financially dependent on search traffic.

Luckily for Vivint — and unlike Rap Genius — the security company does not rely on Google to drive its entire marketing funnel. It’s far more likely that Google’s actions could affect Vivint later on as it competes with entities like Nest (note: now Google-owned) in the home automation market.

Update: Vivint PR manager Jenna Cason has provided VentureBeat with a statement, and shares that Google originally reached out to Vivint regarding “unnatural link usage”:

Through a manual audit, Google brought to Vivint’s attention an unintended violation of quality guidelines regarding unnatural link usage. Vivint addressed the issue within 24 hours and immediately created an ongoing audit process to prevent the situation from recurring. Vivint currently has a Reconsideration Request pending with Google to remove the action.