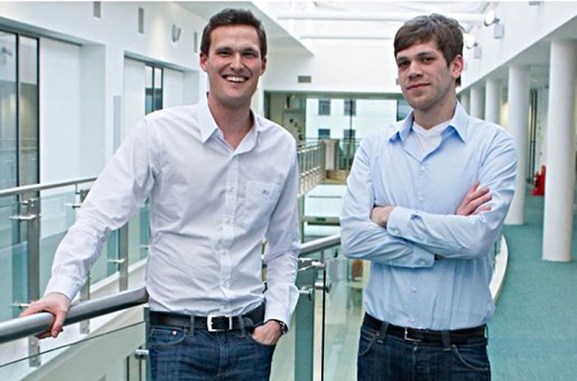 The NSA spying program and the media frenzy surrounding it well and truly brought the subject of online security to the forefront of Internet users’ minds last summer. A blow for the credibility of many large Internet sites, the scandal did, however, provide a publicity boost for services specializing in online privacy.

Berlin-based ZenMate is one of them. It offers a Google Chrome plugin that, after a one-click download, encrypts users’ browser traffic. Launched six months ago by cofounders Simon Specka and Markus Hänel after a stint in the Plug&Play Accelerator program, the startup recently reached the million-user milestone.

The startup isn’t just targeting the privacy-conscious, though. It also allows users to access sites regardless of their geographic location, meaning a lot of Europeans are taking advantage of the service to stream Netflix and Hulu. ZenMate also recently received a spike in downloads from sports fans keen to watch the Sochi Olympics.

We caught up with Specka to find out more about the service and what’s coming up next for ZenMate.

Who are your main competitors?

Since we are a browser-based solution there are no strong direct competitors. There is no other noteworthy extension that fully covers our features or gives an equal level of security and speed. ZenMate is a plugin with VPN-like features, which means that our closest competitors are full VPN providers. Hotspot Shield or TunnelBear are the most common solutions for that today.

There are, however, three big differences between us and them.

First of all, they charge for their service at a very early stage, which we don’t do at all.

Second, they are not as easy to set up as our solutions. Our plugin is integrated in the browser, which is the main portal for most people to access the Internet and the most important tool for a non-technical user. The usability of ZenMate exceeds our competitors by far as it is a one-click solution and easy to handle.

And the most important difference between us and every other solution is that we are usually much faster than any of them (even the paid services).

What is your USP?

Our USP in the browser space is the additional layer of security we offer via the encryption of the whole browser traffic, which other browser plugins do not provide. The browser traffic isn’t only sent via a proxy, but is also encrypted. That means double the protection by hiding your original IP and tunneling the data. Our competitors do either one or the other and are still not as fast as ZenMate.

Our USP in the VPN space is that our service is faster and that we subscribe to Germany’s strong data protection laws and do not track or record what people do. That isn’t necessarily the case for our U.S./UK based competitors as these countries have less favorable data protection laws.

What do you see as the major upcoming trends in online security?

We think that people will start to pay even more attention to privacy in their communication and while surfing the web in general. Encryption will play a vital role for that. We think it will become as common to use a product that hides your IP and encrypts your data as it is to use an antivirus program or a firewall. We also think that there is huge potential in the secured and private online communication space, which is why we want to work on solutions in this area in the near future.

What’s up next for ZenMate?

We are currently developing ZenMate for mobile (Android and iOS), which will be available in the near future, plus we’re evolving our online browsing product, too.

Have you received any financing?

ZenGuard, the parent company of the ZenMate plugin, was part of the first cycle of the Axel Springer Plug&Play Accelerator. We also received an investment from Project A; that is our main source of funding at the moment. Furthermore, a round of renowned business angels, among them David Khalil, Philipp Kreibohm, and Robert Maier, also invested in ZenGuard.

We are going to start to raise our next round this year, which will give us even more possibilities to reach our ambitious goals and to constantly evolve our existing products, as well as to make large leaps in new product development.

Are you concerned about the potential backlash from governments of countries with internet censorship, such as China or Iran? could they block ZenMate?

First of all, we are totally against censorship and restrictions of the Internet in general.  Basically, it is technically possible for countries like Iran and China to interfere with our service or even block the access to it. Some things regarding that are beyond our power to solve. We disapprove of measures like that, but they are unfortunately reality in some parts of the world.

How do you ensure people are not taking advantage of ZenMate’s secure browsing to search for illegal material?

We do have measures in place to avoid abusive behavior, but we are also bound to German law, which is very strict when in comes to data logging and user privacy. We are not allowed to log any data, which is also the reason why we can guarantee privacy of users and lets us stand out from our competitors.