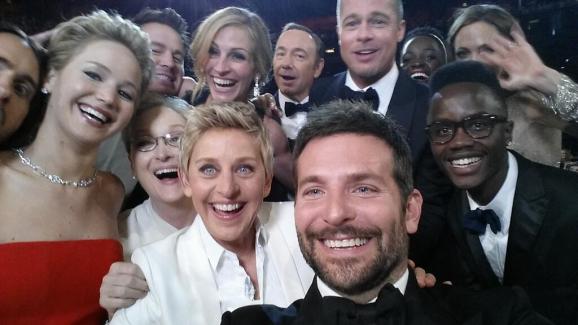 Ellen Degeneres takes a selfie at the 2014 Academy Awards

During the Samsung-sponsored Academy Awards tonight, host Ellen Degeneres wrangled celebrities from the audience to tweet an awkward selfie with her Samsung Galaxy Note 3 (which made several appearances during the show).

At the time of this post, that tweet has now been retweeted more than 1.3 million times. That’s far ahead of President Obama’s 2012 election victory tweet, the former record-holder, with more than 780,000 retweets.

Clearly, all it takes to beat out Obama on Twitter is the combined celebrity powers of Bradley Cooper, Jennifer Lawrence, Brad Pitt, and more. (Let’s call it Captain Planet Hollywood.)

The biggest winner here is Samsung, which bought gobs of ad time during the Oscars. Samsung also worked in several “native advertising” moments, which involved Ellen whipping out her white Galaxy Note 3 to tweet photos of the audience. Her first attempt was a blurry mess, but this group photo alone is clearly worth whatever ungodly price Samsung paid to sponsor the Oscars.

Unfortunately for Samsung, Ellen also swiftly switched to her iPhone for backstage pics. Next time, Samsung needs to make sure to book the talent for off-screen tweeting time as well.

Check out a clip of Ellen’s epic selfie below, with Samsung’s phablet prominently displayed: