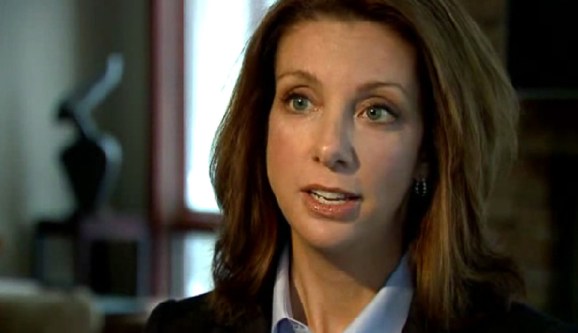 Shannon Watts from Moms Demand Action, who started the petition drive to get Facebook to alter its policies on gun-themed fan pages.

Facebook announced today that it would remove posts offering to buy or sell guns without background checks.

The social network is also launching a campaign to educate Facebook users about its policies regarding the sale of regulated items, such as guns. Among other things, Facebook wrote:

We will require Pages that are primarily used by people to promote the private sale of commonly regulated goods or services to include language that clearly reminds people of the importance of understanding and complying with relevant laws and regulations, and limit access to people over the age of 18 or older if required by applicable law.

Facebook noted that the moves are made in concert with several organizations: Sandy Hook Promise, Americans for Responsible Solutions, the Office of the New York Attorney General, Moms Demand Action, and Mayors Against Illegal Guns. The latter two groups were instrumental in pressuring Facebook to more effectively enforce its existing policies regarding illegal gun sales.

A spokesperson for Schneiderman confirmed to VentureBeat that a press conference would take place but declined to specify the topic.

The press conference may also address the issue of a letter Schneiderman sent to Facebook last year about illegal weapon sales by people skirting the company’s user agreements.

The social network and its subsidiary Instagram have been under pressure from the powerful Mayors Against Illegal Guns and the Moms Demand Action civic group to ban gun-themed fan pages on Instagram.

A VentureBeat investigation last week revealed that adults and children were making arrangements to buy, sell, and trade guns through the many Facebook fan pages devoted to guns and the people who use them. These transactions are contrary to Facebook’s policies and sometimes in violation of federal and state gun laws.

The Google+ social network has similar user rules in place and enforces them aggressively when users notify Google of violations. The result is that it’s difficult to find guns for sale on Google+. Facebook and Instagram also encourage users to report illicit behavior on their fan pages, but guns for sale are easy to find on Facebook.

Last October, a 15-year-old high school student in Kentucky bought a 9mm handgun from a man he met through a Facebook fan page. The teen was arrested when he was caught with the loaded pistol on the campus of Greenup County High School. The seller drove from Ohio to Kentucky to make the sale and was also arrested. The suspect told sheriff’s investigators he had sold other guns to people he met on Facebook fan pages.

A Moms Demand Action petition on Change.org to prohibit gun sales on Facebook and Facebook-owned Instagram has over 94,000 signatures. Comedian Sarah Silverman recently tweeted about the campaign, which is getting massive exposure through U.S. media outlets.