Robots: they build your Teslas, assemble your iPhones, and now they teach your college kids.

The Baxter Robot, created by Rethink Robotics, teaches undergraduate students at the University of California, Berkeley, the principles of using and coding for robots — the same kinds of robots that will be assembling automobiles, constructing phones, and performing all kinds of tasks in the next decade or two.

Baxter teaches alongside a professor, of course. It’s an affordable robot at $22,000, compared to other learning bots that can cost up to $250,000. But it’s mostly attractive because of two very key issues very key issues: safety and its universal operating system. 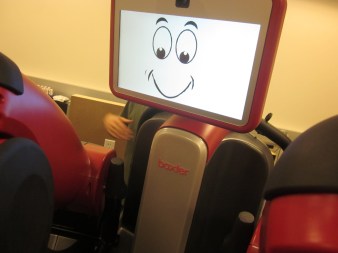 “It’s a relatively safe robot, so I can leave the students working with it without really worrying that I could go to jail,” said professor Ruzena Bajcsy in an interview with VentureBeat,

“In my younger days a robot like this would be in a cage. People were worried it would hit you.”

The biggest benefit, according to Aaron Bestick, the graduate instructor for the advanced robotics class, is the fact that it runs “ROS,” or the Robot Operating System. There is a movement within the robotics industry to move to a standardized OS, and Baxter is teaching the next generation of builders how to use it.

“From my perspective, designing labs … the fact that it runs ROS and has a software interface that you can pull software components from — you don’t have to worry about the how the hardware works,” said Bestick.

ROS allows anyone to be able to build apps that can run across a variety of machines. The Kuka Robot is another example of this kind of teaching robot that supports app development. Kuka, according to Bestick “is a much more industrial kind of robot. It’s much more precise and much more expensive.”

The idea is that someday, the entire robotics industry will share this underlying software. Professors, developers, and robot creators alike hope the same mobile revolution that came from the birth of iOS and Android will come to robotics.

“That’s what everybody hopes for, and if the university creates more and more creative software, as we are through this class, then the companies will adopt that,” said Bestick.

Baxter is a seriously friendly looking robo-dude. He looks like a larger-than-life-sized robot toy, covered in a bright red plastic and programmed with a smile on his face. Because he is run by ROS, the class is a cross between a robotics lab and computer science course. Students use Python and other coding languages to control Baxter’s variety of sensors, which Bestick says aren’t the most accurate in the industry but will do for this use case.

One student group programmed Baxter to “clean up” a table, showing it first where certain items on a table belong and then shuffling the items around. Using its camera and other sensors, Baxter was able to identify the objects and move them back to their original resting spots.

The class is made up of around 30 students, of which quite a few are women, a fact Bajcsy is proud of since she believes the robotics industry isn’t made up of enough women.

“There used to be a prejudice that women shy away from robotics. Not true.”

She downplayed the “screwdriver complex,” which suggests women don’t like to get their hands dirty with machinery. But Bajcsy has proven in her own career — having won a number of awards and taught at well-known institutions — that women contribute great things to robotics.

Certainly neither Baxter nor the students are perfect. Some demos didn’t work; some worked when all the stars aligned. But despite the somewhat trial and error nature of Baxter, it was obvious that it is a huge hands-on asset to a class of kids who might be building your next assembly line.