At the Duck’s Nest preschool in Oakland, Calif., a fluffy blue robot asks a group of toddlers, “I want to be your friend. Will you please be my friend?”

Robotics experts are testing this low-cost and affable robot, called Romibo, at schools across the country. According to its creator, Aubrey Shick, special-needs children can benefit most from social robots like Romibo — particularly those with autism.

Indeed, behavioral experts say that human facial features can overwhelm those with an autism spectrum disorder (ASD). Researchers at Vanderbilt University found that autistic children are more comfortable looking at a robot than a human therapist. 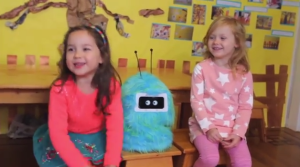 Above: The Romibo “social robot”

Recent studies have shown that social robots provide therapy (or co-therapy, in combination with the efforts of a human expert) and potentially even help teach autistic children new skills.

And when used in a clinical setting, these talking robots may even help diagnose autism earlier. Most autistic children aren’t diagnosed with the disease until they are at least 3 years old. But studying eye movement in high-risk babies (those with an autistic family member) can lead to an earlier diagnosis. A sophisticated social robot with cameras for eyes could study such movement in an infant over periods of time to detect signs of autism.

In 2013, interest in social robotics grew when the University of Notre Dame published results from a study of 19 children with autism, which may be the largest trial to date for this technology. The researchers purchased a $14,000 talking robot, nicknamed Kelly, to coach autistic children to make eye contact or take turns talking. Kelly is a Nao “humanoid” robot, developed by French parent company Aldebaran in collaboration with eight universities and robotics companies in the U.K., France, Switzerland, Greece, and Denmark.

The results were promising: Social robots do seem to help autistic children.

Social robotics for the mass market

The challenge to mass-market adoption, however, is price. Most of these smart robots do not come cheap.

Since the 1990s, the field has attracted a great deal of attention from university professors armed with ample grant money. Funding for research has increased in the past decade, with autism labelled a public health “epidemic” in the press. A frequently cited 2013 report from the U.S. Department of Health and Human Services and the U.S. Centers for Disease Control and Prevention found that 1 in 50 children between the ages of 6 and 17 have been diagnosed with an autism spectrum disorder. This represents a more than 70 percent jump in the diagnosis since 2007.

In recent years, the space has finally opened up to lower-budget researchers and hardware entrepreneurs, who are raising money for their early prototypes on crowdfunding sites. Social robotics is no longer an obscure area of research — it’s now a viable business opportunity.

“It’s a prime example of what becomes possible with the new hardware ecosystem,” said Matt Turck, the managing director at New York-based venture firm First Mark Capital. “You can build a niche solution like this at low cost using a cheap, versatile computer like the Raspberry Pi, and through crowdfunding, you can get it funded by people who care passionately about the issue.”

While the Kelly robot used in the Notre Dame study cost thousands of dollars, Shick intends to sell Romibo for a few hundred dollars. Later this year, she’ll launch a campaign to raise funds on Kickstarter or Indiegogo.

“Finally, we’re developing low-cost robots and putting them into people’s hands,” she said. “These robots are now affordable for researchers with less of a budget, [as well as for] schools and families.” 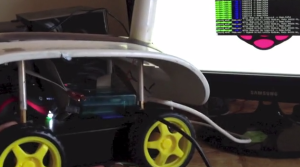 Above: The One is designed to gather data

In Boulder, Colo., another team is building its own low-cost robot for children with special needs. The founders of Robauto are raising funds on Kickstarter for a new social robot they call One (the company has already raised $50,000 from the Healthbox startup accelerator and others). Developer kits cost just shy of $150, and the One robot is both customizable and portable. It runs off the Rasberry Pi micro-computer and is designed to gather data about autism.

The One Kickstarter campaign is trudging along slowly. It has raised a little more than $4,000 of a $50,000 goal with a week to go. The campaign may struggle to connect with potential buyers as the One isn’t particularly cuddly or human-like. It’s not nearly adorable as the Romibo, which resembles a 21st-century Furby.

Still, Robauto’s founders are convinced that One will find its market, if only because it’s one of the most affordable options.

“Cost was a big hindrance for social robotics,” said company spokesperson Jalali Hartman. “So we set out to bring the costs down to less than [the cost of] an iPad.”

Can these robots replace human therapists?

Romibo, One, and the slew of other new social robots are inexpensive, in part because they do not incorporate artificial intelligence.

Shick said it was an intentional choice to steer clear of A.I. She doesn’t subscribe to the school of thought that a robot should replace or fill in for a therapist or exhibit human-like sentiment. Rather, Romibo is designed to be an assistive device for a behavioral expert or teacher. Shick’s goal is to use technology to promote social behavior, not just to have the child solely engage with the device.

Other scientists believe that the most successful robots are smart enough to interact with a child. Kelly incorporates A.I. and is capable of developing and displaying emotion. Like other Nao robots, Kelly can also walk, talk, and dance. When the kids succeed, the robot can even give them in a celebratory high-five. 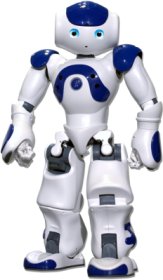 Above: The Nao robot

Questions remain about the type of robot that will have long-term success with an autistic child. It’s still too early to know whether special needs children will respond better to simpler robots like Romibo or a more sophisticated device like the 23-inch-tall Nao. It’s also not yet clear why some children respond to social robots and others do not and how well the learned skills translate to the real world.

“What we’re all hoping to do is present the theory and procedure for how to effectively use the robot in the field — no background or research expertise needed,” said Shick.

“We’re finally leveraging these robots for the mass market to really make a difference.”

Don’t miss the video below to see how preschool children engage with the Romibo.