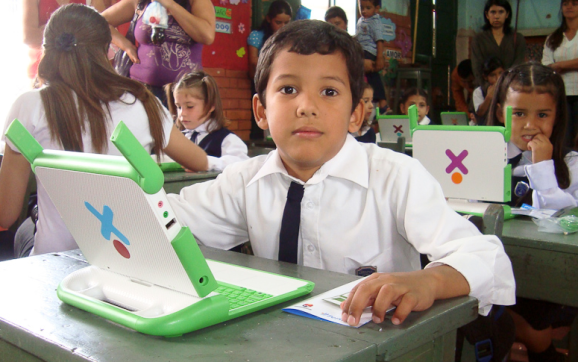 The once-revolutionary One Laptop Per Child (OLPC) project appears to be on its last legs.

“The XO-1 laptop is history,” says a story in today’s OLPC News, which has long followed the movement to build and provide an easy-to-use $100 laptop to poor children in third-world countries.

The flagship Boston area office, the publication noted, is closed, with staff gone. The office phone number plays an outgoing message saying that “the person you are trying to reach cannot receive your call.”

A story in today’s Pocket-Lint.com, citing OLPC News, headlines that the “One Laptop Per Child project is dead.” Both publications point out that there is still a Miami office serving OLPC projects in Uruguay, Peru, and Rwanda.

A woman answering the phone at the Miami office, who declined to give her name, told VentureBeat that “OLPC is still operational” and described the Pocket-Lint characterization as “not accurate.” However, she would not provide information about what the accurate state of the organization is.

Updates to the OLPC website appear to have stopped in the fall of last year, although there are still dozens of OLPC-related community websites worldwide.

OLPC has been licensed to Vivitar, a subsidiary of Sakar. Last year, it launched the first Android XO tablet, which it described as “fully designed and developed by OLPC.” In January, Vivitar announced new 7- and 10-inch OLPC tablets, priced at $150 and $200 respectively.

The first one up the hill

Sugar, the “Human Interface” developed for the XO, appears to still be breathing. As of March 9, spinoff Sugar Labs reported 10 million downloads, and a Sugar Camp in Paris is planned for April.

Wayan Vota, the cofounder of OLPC News, told VentureBeat that the Miami office represents an OLPC for-profit company that split off from the Boston-based, nonprofit OLPC Foundation several years ago. “The OLPC Foundation was focused on the greater good,” he said, adding that, “if it still exists, it’s in name only.”

He described Vivitar’s XO tablet as “a standard Android tablet with a rubber bumper and a nice bundle of apps.” Sugar, he said, “has never really been ready for primetime.” When it was released, Vota said, “all the geeks loved it, but it was so innovative no one knew how to use it.”

Founded in 2005, OLPC had an audacious mission: to develop virtually from scratch a $100 laptop to empower the world’s poorest children through education. With commercial laptops now available in the low hundreds, it’s hard to remember that, when OLPC was founded, the goal of a $100 laptop seemed fanciful.

The resulting product offered such innovations as a hand-cranked battery, peer-to-peer serverless communication, and a physical design that resembled a toy. The OLPC website said that 2.5 million OLPC laptops have been distributed to children in 60 countries.

“The whole netbook thing came about because of OLPC,” Yota said. “OLPC begat netbooks, which made people realize there was a fortune” to be made in very low-priced computers.

He also cited the “amazing success” that OLPC laptops have had in Uruguay, with the “jury still out” on deployments in Turkey, Thailand, and Kenya.

But you have to remember, Vota said, that “the first person charging up the hill always gets gunned down.”

Disclosure: I worked as a consultant over several years in the early 1980s for Negroponte’s M.I.T. Media Lab.