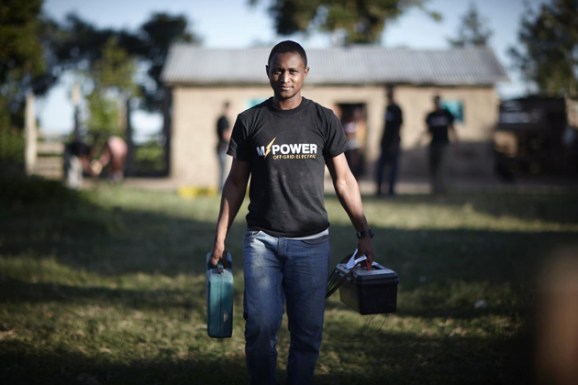 Off Grid Electric delivers solar power to homes in Africa

Why do more people live without electricity today than when Edison turned on the first light bulb?

For as long as he can remember, Xavier Helgesen has been fascinated with this question. And today, he landed $7 million in financing for his Arusha, Tanzania-based venture, Off Grid Electric, which provides solar energy to people in emerging nations.

“The benefits of our advances in technology overwhelmingly accrue to the richest, not the poorest,” said Helgesen in an email exchange with VentureBeat.

Helgesen met his cofounders, Erica Mackey and Joshua Pierce, during their studies at Oxford University. The three friends bonded over clean-tech and eventually decided to make the move to Tanzania, where some 85 percent of households operate without electricity.

Off Grid Electric charges a minimum of $5 per month for any home in Africa to access solar power through its M-Power energy hub in Tanzania. The pitch to potential customers: Switch from kerosene lamps to solar, and you can benefit from a higher-quality and cheaper service.

Off Grid is unique in applying the mobile phone’s business model to clean energy. Customers in Africa pre-pay for the service each week. They can opt to top up their solar energy system in small increments and pay on mobile. The company makes its money by providing its electrical service with very little cost, since sunlight is free. The company also charges for service and installation. About 10,000 households in Tanzania and surrounding countries are currently signed up to Off Grid.

Helgesen said he won’t stop until the company can deliver on its vision to “light Africa in a decade.”

“But are the only ones building a full solar-as-a-service model with our own distribution network on a massive scale at a price point that any customer can afford,” said Helgesen, when asked about the competition.

These rivals are a potential obstacle to growth, but Helgesen said the biggest challenge is finding talented engineers and business executives who are willing to relocate to Tanzania. The company is growing quickly and has a clear social and environmental purpose, but it also expects to make money.

For this reason, it was a highly attractive prospect for the growing crop of “impact investors,” who are funding for-profit companies that seek to do good.

“Solar power is already more cost effective than kerosene and other polluting power sources that are common in the developing world,” said Rive in a statement.

“Many emerging economies skipped the build-out of phone lines to go straight to cell phones, and the combination of solar and storage can obviate the need for more power lines. Off Grid’s growth could have a profoundly positive impact on the economies, human health and air and water quality in the markets it serves.”

Existing investors Jasmine Investments, Givia Pty, The World We Want Foundation, Segal Family Foundation, Mulago Foundation, Serious Change LP, Frank McCrea (founder of Procom), and BW-JVE Investments (founders of The Tirerack) also participated in the round. The company also received grants and loans from the Africa Enterprise Challenge Fund, the Energy and Environment Partnership for Southern and Eastern Africa (EEP), and about half a dozen others.