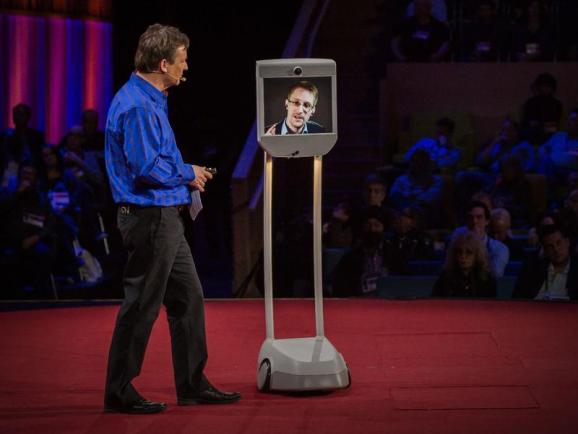 Snowden on stage at Ted 2014 as a telepresence robot.

According to Greenwald, Snowden has played no role in “deciding which documents are or are not reported” since he left Hong Kong.

Edward Snowden has not leaked a single document to any journalist since he left Hong Kong in June: 9 months ago. — Glenn Greenwald

Greenwald asserts that Snowden handed over a set of documents to “several journalists” and asked them to make judgements regarding what content should and should not be published.

Snowden provided some documents that were never intended to be published — instead they were offered as background for the purpose of providing context, according to Greenwald. If true, it’s unclear whether or not any journalists have gone against Snowden’s wishes.

Back then, he provided a set of documents to several journalists and asked that we make careful judgments about what should and should not be published based on several criteria. He has played no role since then in deciding which documents are or are not reported. Those decisions are made entirely by media outlets that are in possession of those documents.

Greenwald offered another interesting point of clarification: calling a new story “Snowden’s latest leak” is inaccurate, he claims, because there has only been one (singular) mass leak.

You can read Greenwald’s entire explanation here, which offers old and new claims on how NSA leaks have been handled since June 2013.