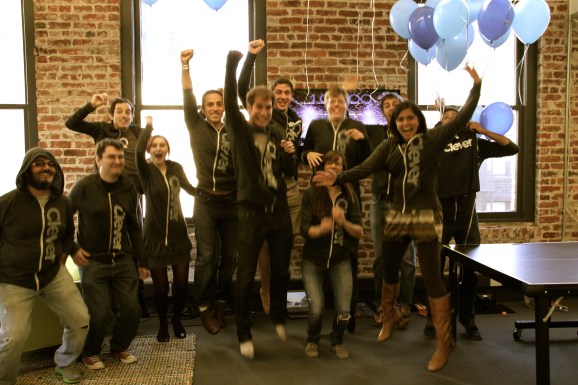 A small startup called Clever is helping teachers avoid one of the most painstaking parts of the job: Manual data entry.

Clever’s product is designed to make it easier for teachers to enroll and track students. Using a single sign on, students can peruse online resources from myriad vendors, and teachers can log performance for students in multiple classrooms. The key is that teachers only need to input student information one time.

This may sound rather boring, but the technology is resonating with its target market. Since 2012, the company has sold its software to more than 18,000 schools. That’s roughly one in seven schools in the United States, according to data from the National Center for Education Statistics.

To continue this pace of expansion, the education technology startup has secured $10.3 million in its first round of venture financing today from Sequoia Capital. Sequoia’s Bryan Schreier, who has joined the company’s board, describes Clever as one of the “fastest-growing” ed-tech startups he’s ever come across.

Tyler Bosmeny, founder and chief executive, depicts Clever’s rapid adoption in more modest terms. In a phone interview, he referred to his company as “one of the unsexiest ever.” But that’s precisely the reason why Clever has taken off.

“We are solving a real challenge for teachers,” said Bosmeny.

“We started this company because we wanted to alleviate a real burden that was falling on teachers and principals to keep all these IT systems up to date by hand.”

After its 2012 graduation from Y Combinator, the Mountain View, Calif.-based startup accelerator program, Clever began selling its software to schools, and forging partnerships with developers focused on online learning. Today, the product integrates with more than 100 education developers, including Amplify, Imagine Learning, and Google.

The product was initially tested in Denver, as cofounder Dan Carroll worked at a school in the area during a stint at Teach for America. While working as a teacher, Carroll realized that schools lacked a standardized software for updating and managing K-12 student data. The company initially developed a universal API to connect schools with educaiton developers, but it’s rebranding as a “digital learning platform.”

With its fresh funding, Clever plans to hire more developers and salespeople to add to its team. The San Francisco-based company currently retains 18 employees.

According to Bosmeny, the biggest challenge going forward will be to continue to keep up its pace of expansion. The company also sees some competition from upstarts, such as Engrade, which was recently acquired by McGraw-Hill. Former rival Learnsprout has pivoted to a technology that evaluates attendance trends.

The company declined to disclose any information about its revenues.