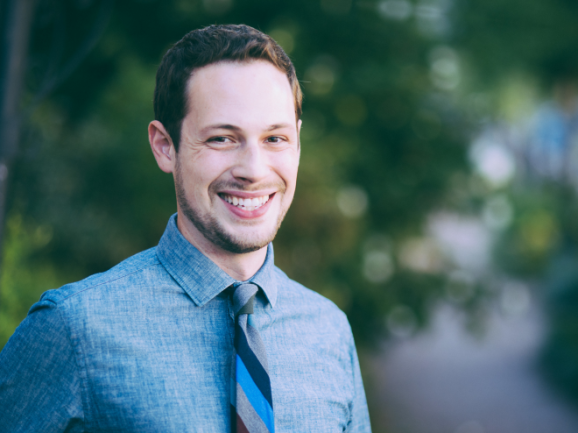 So the 28 year old, a software engineer and former general manager at a Washington, D.C., startup called MapBox, is seeking the Democratic nomination for his home district in New Jersey. A win would be a bit of a long shot, but Cole is optimistic that his “outside the box” campaign tactics will inspire voters to take a chance on someone new.

“There aren’t a lot of technology people in policy-making,” said Cole. “But what really pushed me to get involved is to make things better where I grew up.” This is Cole’s first congressional race.

Cole is running for Congress in South Jersey, a district that includes Atlantic City. It’s a region with high unemployment, where many residents don’t have access to high-quality health care, education, or decent Internet access.

But Cole’s first love wasn’t politics; it was computer science. He spent his childhood tinkering with computers before heading to Rutgers University (which is in New Jersey) to study computer science. He eventually switched his major to political science and worked his way up to the White House after graduation (after volunteering for then-Sen. Barack Obama’s presidential campaign). He most recently served as a deputy director of new media for the White House and helped build the Whitehouse.gov website.

During the 2008 Obama campaign, he met and befriended Dan McSwain, another campaign staffer. A partner at D.C. based campaign-strategy firm GEER, McSwain is volunteering as an adviser to the “Cole for Congress” campaign.

For McSwain, it’s an opportunity to pioneer a new kind of campaign: One that involves being transparent about the issues and accessible to digitally-savvy voters. Cole made his positions available on open-source repository Github, and is taking suggestions for improvements from fellow developers, and he recently participated in an “Ask me Anything” (AMA) on Reddit. He’s among the first candidates to use the trendy personal publishing platform Medium as part of his public outreach.

“Dave is pioneering the kind of Internet-friendly campaign that is only going to become more popular,” McSwain told me by phone.

Cole wants to unify technology and politics in two ways: by using digital tools in his campaign, and by focusing on issues that affect anyone with an Internet connection — Net Neutrality, telemedicine, copyright reform, and the protracted fight against patent trolls.

Given his background in government, Cole is also hoping to automate old government IT systems, which are keeping veterans and other groups in the state from accessing social security.

These issues may not seem like a short-term priority for South Jersey residents, who are struggling to make ends meet. But Cole is convinced that technology is relevant and can radically improve people’s lives. For instance, teachers in rural areas in parts of New Jersey lack high-speed broadband, so Cole said he plans to work with the FCC to evaluate how it regulates the Internet.

“It’s unacceptable that we can’t extend the Internet as a vital resource to people across the country,” he said.

“Honestly, it doesn’t matter where technology has been developed [such as tech hubs like Silicon Valley and New York]; it matters where and how it’s being used.”

Standing up to the competition

For all of its promise, Cole is up against some stiff competition.

Within his own party, he’ll need to fend off Democrat Bill Hughes, Jr., a former federal prosecutor and son of former New Jersey Congressman William J. Hughes.  He also faces the incumbent Republican, Frank LoBiondo, who has represented the district since 1995.

Hughes is not running a digital-first campaign. His campaign staff recently accused national Republicans of cyber-squatting on a host of websites with Hughes’ name. (At the moment, the site www.billhughesjrforcongress.com directs visitors to a page accusing the candidate of representing New Jersey’s most “corrupt criminals since 2002.”)

But Hughes does come from a family with a political legacy, which means something in New Jersey. Last week, Hughes received the endorsement from the Atlantic County Democrats.

After a grueling few weeks of canvassing, Cole is exhausted, but he’s more convinced than ever that people in New Jersey want change. On March 7, he blew past 200 signatures, making it onto the June 3 ballot.

The pitch on his official campaign website hints that he’s a very different kind of candidate, but doesn’t openly swipe at his rivals: “As an engineer, I am ultimately judged on results — the product I ship — and not just what I say.”

As for the most daunting challenge — fundraising — Cole has a plan. He is raising “small dollar” sums, rather than appealing to the region’s wealthiest residents. He’s also in talks with the superrich investors of Silicon Valley, particularly those with an emotional tie to New Jersey.

Tech execs from Facebook, Google, and the like may be a receptive audience. Increasingly, tech firms are mobilizing and spending big on lobbying Washington. In San Francisco, Mayor Ed Lee drummed up a solid supporter-base by positioning the city as a “tech capital,” and Democrat Ro Khanna has outraised incumbent Rep. Mike Honda (D-San Jose) in his bid for Congress. Khanna received much of this support from employees at Yahoo, Google, and other tech companies.

One tech investor I spoke with Emergence Capital Kevin Spain, who hasn’t donated to many political campaigns. But he did say that more tech investors and entrepreneurs are keeping a close eye on politics.

“I have certainly seen more investors take a public stand on political issues, though the issues I see them most frequently advocating for are closely related to tech,” he said.

Still, the Bay Area is not South New Jersey.

Before concluding our interview, Cole stressed that he’s aware of the challenges up ahead, but he’ll run regardless.

“There’s no getting around how expensive it is to run a viable congressional campaign,” said Cole.

“Money is the No. 1 thing holding people back from running for office. It stops young people, teachers, and lawyers. But I believe that small dollar donations are the way forward, and we can bring more diversity to Congress.”