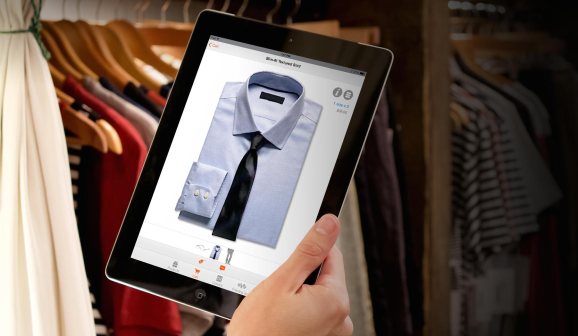 With $8 million in the bank from Emergence Capital, New York-based Handshake is expanding beyond its original focus — mobile order management for sales reps — to make wholesale buying and selling feel more like shopping online.

According to Handshake chief executive Glen Coates, the buying and selling process between brands and retail stores is begging for innovation.

“If a retail store sells out of their last stroller, right now that store would probably send their salesperson an email, or give them a call, and ask if they can order another one if it’s in stock. They’d check if it’s in stock, say yes, and then the person on that phone would type the order into an accounting system.

We’d like to give people operating retail stores a user experience closer to what you’d get as a consumer.”

Back in 2010, Handshake set out to replace the outdated clipboards, fax machines, and spreadsheets salespeople use with iPad and iPhone apps. As we’ve said before, this is about as B2B as a company can get. But even with an enterprise focus, Handshake is taking its consumer-inspired push seriously; not long after the raise, the company even hired a consumer app designer to lead its design team.

Coates plans to round out Handshake with a stronger Web presence and expand the company’s sales team. “We’re a mobile-first company. It really made sense to start there,” said Coates. “But we don’t want to be a mobile-only company.”

In Coates’ eyes, Handshake has a wide-open opportunity to drastically improve the buying and selling experience. Unlike Joor, a competitor that specifically targets the fashion industry, Handshake isn’t building a massive marketplace for users. Coates says Handshake will also remain vertical-agnostic.

According to Coates, the wholesale market has incredible potential: “Even Nike only sells 17% of its revenue direct to consumer. The vast majority of brand revenue comes from wholesale.”

Having Emergence as a lead investor certainly counts as a vote of confidence. The investment firm’s portfolio includes the likes of Box, Salesforce, and Microsoft-owned Yammer.

If successful, Handshake runs the risk of modernizing the traditional sales industry out of antiquated jobs. Coates says Handshake “is not about cutting people out of the mix. It’s about letting them spend time on the human stuff and letting machines do the robot stuff.”

Like most tech companies, Handshake’s bread and butter is process improvement. Instead of monitoring phones and fax machines, Handshake hopes to enable salespeople to focus on relationships and help buyers stock their shelves as efficiently as possible.