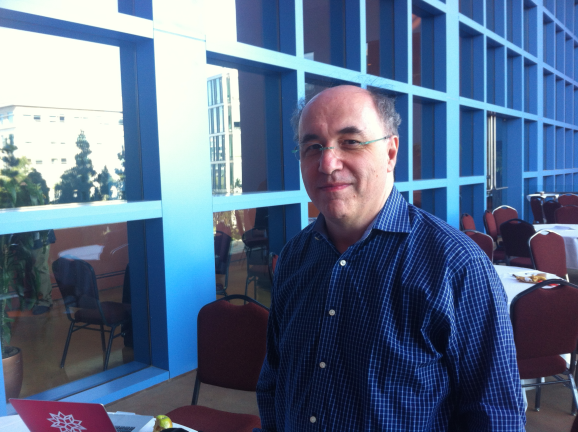 SAN FRANCISCO — I asked Stephen Wolfram how he could make his ambitious new Wolfram Language into a commercial success and a developer favorite.

He responded by typing out some sample code.

“Let’s make a really stupid API function whose sole function in life is we give it the name of a cat, and … it will give us an image of that type of cat,” he said.

In an instant, Wolfram cooked up that function. Then he typed “Burmese” into a search box and got a photo of a Burmese cat. He asked the service to spit out code for the API in the Java programming language, not his powerful Wolfram Language. “We’re rapidly expanding the set of languages for which you can do that,” Wolfram said.

It was a technical answer, not a marketing answer. And it hints at Wolfram’s utter conviction in the power and all-encompassing nature of the Wolfram Language, a highly efficient mega-language that can handle statistics, geometrical calculations, image processing, data visualizations, and more.

But even with his inclination to show what the language can do before talking about the business, he and his company, Wolfram Research, have, in fact, devised a multipronged go-to-market strategy, which matches the language in terms of innovation and reach.

The first products making use of the Wolfram Language will become available for people to try later this month, Wolfram said during a visit to San Francisco this week for the DEMO Enterprise conference, at which he gave an on-stage demonstration of the language.

While Wolfram has come up with some of the very models underlying the new language, he has also helped his colleagues design a system for selling software based on the language.

For instance, he thought up a new unit called cloud credits. They’ll represent the amount of CPU time that developers’ requests take up on the forthcoming Programming Cloud for building and launching applications.

Off-hand, Wolfram couldn’t remember the exact costs for cloud credits. They aren’t listed online yet. But they will be.

And indeed, Wolfram Research has detailed plans for getting people to pay for services that use the Wolfram Language, which builds on Mathematica and the WolframAlpha search engine.

A high-performance computing option, for scaling out computations across lots and lots of servers, will be available, along with a software package for data science that will carry a seat-based pricing structure.

Groups that teach programming will be able to offer a paid desktop version of Wolfram Language software. Schools and school districts might be interested in that product. The Wolfram Discovery Platform will enable iterative product development inside research-and-development departments at big companies. And textbook publishers will be able to pay Wolfram Research to offer books with interactive demonstrations.

Wolfram Research will also provide a service for analyzing data from connected devices.

“The device company is paying for it, and [each] device has a certain price per device per year that we’ll charge for that device company to be able to produce dashboards, analytics, and so on for their users,” Wolfram said.

In other words, the company will have lots of ways to pitch Wolfram Language stuff and thereby bring in revenue.

Across the board, the company can charge based on how much data people want to access, Wolfram said.

Wolfram Research is doing work to expand the amount of data that its language can take into consideration for calculations. It can support a few hundred megabytes or a single gigabyte in memory. It can handle whole files. It’s now making efforts to accept local databases, and distributed databases with data sitting in lots of places are the biggest challenge.

“The notion is being able to deal with all of these levels,” Wolfram said.

As much as Wolfram has been front and center recently to promote the Wolfram Language’s technical capabilities, he’s fairly confident the software has a chance of gaining traction.

“I’ve got pricing that, I think, is very kind of sober in terms of what’s out there in the market,” he said.

But what if the products for the Wolfram Language don’t take off?

“Well, I don’t know,” he said. “Our company goes on the way its gone on for the past 25 years. We’ve had a profitable company for the last 25 years. We’ve spent a lot on the R&D for this while still being profitable. It’ll be a shame, I think — but then I’ll wonder whether I screwed up all these go-to-market kind of things.”