Kamakshi Sivaramakrishnan is the founder and CEO of Drawbridge.

Soon, we will no longer talk about “cross-device advertising.” All advertising will be across all channels, and marketers will have the ability to build attribution models that work across all digital channels.

The reasons for this imperative are obvious:

First, the shift to multi-channel is occurring at lightning speed. In the first quarter of 2013, global tablet shipments passed laptop shipments for the first time (desktop shipments were exceeded in Q3 2012). This means that, in just three years, tablet volume reached a level that took laptops 15 years to reach. Laptops are considered an example of an explosively growing consumer product, and yet tablet growth zoomed by without a glance in the rearview mirror.

Second, users are not abandoning their old devices. Neal Mohan, Google’s lead for all display advertising products, stated recently that “90% of users begin an action on one device and complete it on another.” Users are now spending a significant portion of our time on mobile devices, yet desktop devices are still superior for the completion of certain tasks.

Take this Google study of cross-device behavior from 2012 that found that the majority (65%) of online shopping begins on a mobile device, but gets continued on a desktop computer (61%). Clearly users are beginning a task on a close-by device (mobile), but need to complete on a device that is optimized for research and purchase (desktop).

This causes a major problem for marketers. How do they reach users in a multi-channel world? And how do they properly attribute credit for a conversion to each channel?

[Kamakshi will be discussing the future of targeted advertising at our Mobile Summit next week. Request an invite here!]

It’s important to take a small detour to discuss why this is difficult. The main issue is one of identity. To an ad server, each new device or web browser looks like a completely different person, and as a result, the marketer has no way of knowing how many ads a unique individual has seen or interacted with across their devices. This is exacerbated by the fact that mobile advertising has a cookie problem: specifically, ads served on the iOS Safari browser or within applications cannot rely on third-party cookies for targeting or attribution.

A good example of this phenomenon is a hypothetical story of Best Buy working with Google.

Let’s say that Best Buy purchases search ads through Google that appear in both desktop and mobile search. If someone is interested in buying a new TV, they might pull out their iPhone and search for “HD TVs” on Google. Sure enough, the first “sponsored result” is from bestbuy.com (“Up to 25% Off Select HDTVs, Plus Free Shipping at Best Buy!”). When they click through to Best Buy’s mobile site, they’re shown “1-10 of 507” TVs available, and the user quickly realizes that they don’t actually want to compare 507 televisions on a phone. 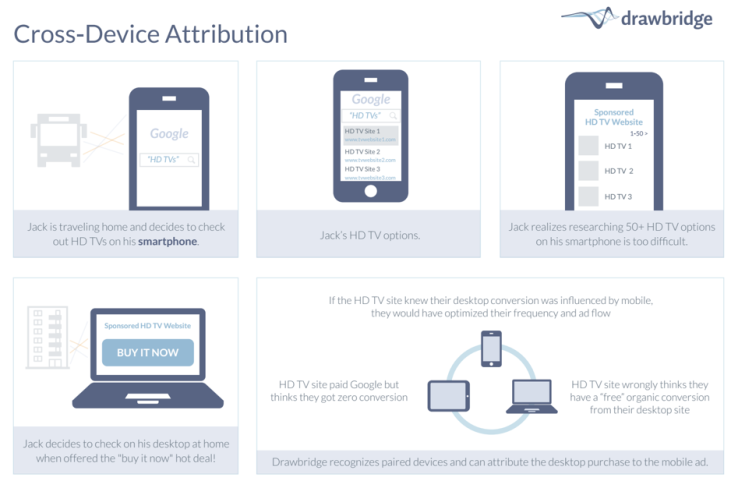 So instead, the user switches to a laptop, goes directly to bestbuy.com, uses the filtering tools to narrow down to the TV they want, and buys it.

To Best Buy, it appears that a user conducted a mobile search, clicked on their result (resulting in a bill from Google), but then didn’t convert. Then a different user came directly to their site and bought a TV without any advertising expense. The result should be that Best Buy lowers their bid for Google mobile search.

But both Best Buy and Google are much smarter than this. They both know that this phenomenon occurs: they just don’t know how often. Google has taken a step towards addressing this by adding cross-device analytics to Google Analytics, however, there is a major limitation: user identity is established through log-ins across devices. While all users on Android are logged into Google services automatically, this is not true of iOS. Google just announced “cross-platform single sign-in,” but adoption will take time.

To sum up, all advertising is moving cross-device for the simple reason that consumers are cross-device. Sophisticated marketers all make decisions based on data, and when it is impossible to know which users have seen their ads and which ads were successful, it’s impossible to make rational marketing decisions. Thankfully, help is on the way. Several companies, including Drawbridge, are helping to bridge the identity barrier between devices, which will put a major tool in the digital marketers’ toolbox.

Kamakshi Sivaramakrishnan is the founder and CEO of Drawbridge, the industry leading programmatic cross-device advertising platform. Named one of Business Insider’s “Most Powerful Women in Mobile Advertising” two years in a row, as well as one of Ad Age’s “40 Under 40” in 2014, she is an expert on advertiser-buyer connections in today’s mobile environment. Always an innovator, Kamakshi left her role as Lead Scientist at AdMob (acquired by Google in 2009), to solve a digital advertising problem before it was a buzzword: cross-device.