The U.S. Air Force’s “BATMAN” research team at Wright Patterson Air Force Base in Ohio is beta-testing Google Glass for possible use on the battlefield.

And so far, it likes what it sees.

The positive attributes “are its low power, its low footprint, it sits totally above the eyes, and doesn’t block images or hinder vision,” said 2nd Lt. Anthony Eastin, a behavioral scientist on the BATMAN team testing the glasses.

The BATMAN evaluation group is part of the U.S. Air Force’s 711th Human Performance Wing and is one of the military’s most distinguished research and development groups. It comprises both military and civilian behavioral and technology scientists. The BATMAN acronym stands for Battlefield Air Targeting Man-Aided (K)nowledge.

“We borrowed the “N,” Eastin said.

Andres Calvo, a software developer and civilian contractor with the group, told VentureBeat Tuesday that one of the facets of the Google Glass platform the team liked was the capability to “access information very quickly.”

But so far, Glass is “not a silver bullet for many of the Air Force’s needs,” Calvo said. 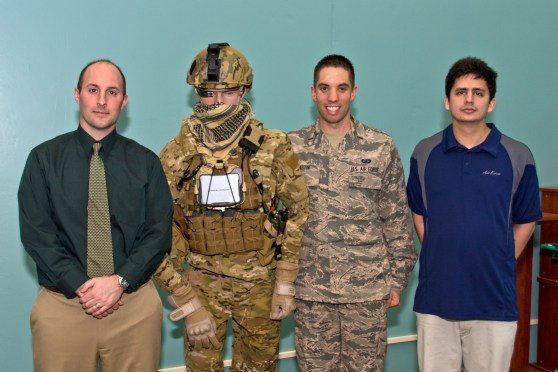 Possible Air Force scenarios for the technology use include forward air controllers working on the ground helping vector fighter and bomber aircraft to their targets, search and rescue missions, and combat controllers communicating with aircraft flying overhead and ground troops in combat, supply, and rescue operations.

The Air Force obtained two pairs of glasses through Google’s Glass Explorer program, in which people interested in acquiring them first apply and then receive notification from Google on whether it accepts or denies their application. Respondents who get the green light must pay $1,500 for the privilege. Eastin said the team had no official relationship with Google at that time.

The BATMAN team is also prototyping proprietary software to enhance the Android OS platform that powers the technology.

“The goal is to build software for research purposes for future endeavors,” Eastin said.

The testing comes as the U.S. military attempts to move beyond using battlefield laptops in combat and intelligence missions and rely more on smart phones, tablets, and wearables, which are easier to use and maneuver in confined spaces and on the battlefield.

Indeed, the Marine Corps recently unveiled a helicopter drone operated by a tablet the military reckons will be of use to missions like the ones laid out by the BATMAN team.

VentureBeat reported in February that the New York City Police Department’s massive and controversial intelligence and analytics unit was also evaluating whether Google Glass was a decent fit for terror investigations and routine street patrol purposes. The department received several pairs of the modernist-looking specs to test out over a year ago.

And the U.S. Navy is also testing smart glasses, but not Google’s: the Navy is working with Vuzix to test “smart goggles,” as VentureBeat reported in February.

For its part, Google reps said it had no official working relationship with the U.S. Air Force, “nor does it have any plans to,” a source said.

A Google spokesperson put it this way in a wan official statement to VentureBeat:

“The Glass Explorer program includes people from all walks of life, including doctors, firefighters, and parents. Anyone can apply to become a Glass Explorer, provided he or she is a U.S. resident and over the age of 18.”

Google Glass is an Android-powered, wearable computer built into a module perched on the side of a pair of eyeglasses. It comes from Google’s special-projects division, called Google X, which is also working on driverless cars and high-altitude balloons that blanket the Earth below with wireless Internet.

Google Glass incorporates a heads-up display reminiscent of that used in advanced fighter jets and commercial airliners to communicate with air traffic controllers and other aircraft. A camera captures photo and video on demand. If the Air Force ends up adapting Google Glass for use among its disparate units, it represents a massive potential revenue stream for Google.

The 711th Human Performance Wing and the BATMAN group are two of the Air Force’s preeminent technology proving grounds. They test existing technologies and design, build and deploy their own. Traditionally, much of the technology emanating from their labs ends up in the field and in combat situations.

The 711th Human Performance Wing (711 HPW) is a unique combination of three units: the Human Effectiveness Directorate (RH), the United States Air Force School of Aerospace Medicine (USAFSAM), and the Human Systems Integration Directorate (HP). The synergies of combining the ideas, resources, and technologies of these units position the 711 HPW as a world leader in the study and advancement of human performance.

The Wing’s mission is to advance human performance in air, space, and cyberspace through research, education, and consultation. We support the most critical resource — the men and women of our operational military forces. From concept to deployment, we provide the solutions to achieve an optimum Airman life cycle: acquire, train, equip, enhance, and protect.

Dr. Gregory Burnett is BATMAN’s chief engineer and said the group was initially formed in 2001 under the BATMAN 1 aegis. The newest incarnation, BATMAN II, was launched earlier this year.

As for the two pairs of Google Glass currently being tested by BATMAN, Burnett says he likes some of what he sees so far and what it potentially portends for the men and women in the Air Force serving a multitude of roles. Glass, he says, doesn’t cause blind spots when looking through it, and possibly updated and enhanced software could indeed make the platform even better.

“The question is, during the chaos of war, how will the technology perform?”