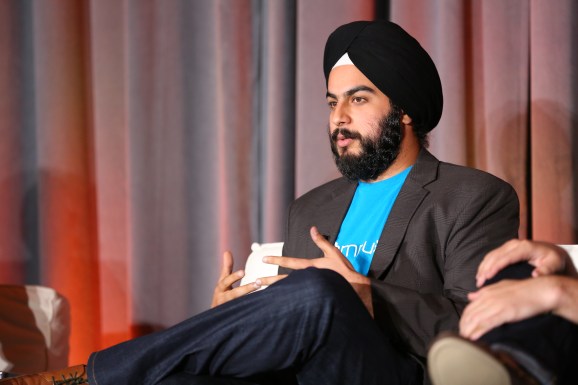 SAUSALITO, Calif. — Jesse Pujji left his gig at Goldman Sachs in New York to secure his spot in the Internet economy in San Francisco nearly five years ago.

He launched Ampush with his own cash, didn’t take a penny of venture funding, and has steadily built up his mobile ad firm to 90 employees. Ampush hitched its wagon to Facebook early in 2010. Today, the social networking giant accounts for nearly 90 percent of his revenue.

Ampush also secured Twitter as a major partner, and today, Pujji and his team are looking to grow their business by signing up other large ad platforms.

Originally from St. Louis, Pijji is intelligent, friendly, accessible, and ambitious. He is a practicing Sikh who retains a trademark beard that he mixes with the Valley’s unofficial tuxedo: jeans, T-shirt, and sport coat.

Pujji sat down with VentureBeat at our fourth annual Mobile Summit and spoke at length about where he sees the mobile ad space going, Ampush’s role in it, and why a consolidation of the mobile arena will likely play itself out in the next two years.

He also offered his own roadmap on how to avoid the pitfalls of the mobile space, like ad rebrokering, and solutions on how to grow a legitimate ad company.

VentureBeat: What does Ampush do?

Jesse Pujji: We’re one of the leading software platforms for running large-scale paid mobile campaigns on Facebook and Twitter. There will be more platforms over time. We’re constantly evaluating other large ad systems, like Yahoo and Pinterest, etc.

VentureBeat: You launched Ampush in 2009 and without venture capital funding and bootstrapped it yourself. Now you have 90 employees, and your clients had approximately $70 million or more in transactions through your platform last year.

Pujji: We kind of did it by luck. My cofounders and I all worked on Wall Street for about four years after graduating, and we saved up some money from our bonuses there. We started out in the business trying to learn and figure out online ad tech. Everyone said if you worked in Wall Street, ad tech is very similar. You can figure out the math and data doing. The first year-and-a-half was experimenting and learning the basics of marketing. From there, we were able to generate positive cash flow. We started taking that money and funneling it to investing and building out a platform on Facebook and Twitter in the early days. So through that process, we became one of the fastest advertisers on Facebook. So we kind of pivoted the business from that point.

VentureBeat: Rebrokering ad campaigns emerged as a topic at the Mobile Summit. It’s a major problem for people in the mobile ad sector. What is happening, and how is it affecting you?

Pujji: Yeah. For us it’s not a huge deal. For our clients it is a big deal.

Our biggest clients come to us and say, “We want to run large-scale ad campaigns on Facebook and Twitter.” We use our software to buy those ads from Facebook and Twitter directly and we can track them down to the persons age and all the different likes and interests and all the information Facebook gives. It’s completely transparent. They can log into Facebook, log into our software, and they can see what they’re buying on Facebook and Twitter. You have to be very careful about policing who you allow to drive those things forward. [You] have to be very careful to know where the inventory is coming from, [be] very transparent with clients, how [you’re] getting inventory and why. Then have the tracking and analytics in place to measure that thing. It’s both sides responsibility, meaning buyer beware. The buyer has to be aware of what he’s getting and the seller has to make sure he’s being transparent.

VentureBeat: Facebook showed the door to two of their mobile ad partners, HasOffers and PlayHaven-Kotangent — now called Upsight — earlier this year for retaining data too long and not storing it in their systems properly. What did you think of that scandal?

Pujji: It’s hard to make sense of it. They’re both great companies. I think … I don’t know what happened. Facebook is obviously a critical and great partner to us, and we’ve shared a lot of clients with HasOffers, so we work together on a lot of clients with them. I’m sure Facebook has its reasons. It was surprising.

Pujji: First and foremost is making sure your paperwork and whatever legal agreements from whoever you’re buying an ad from are crystal clear on what is allowed and what isn’t allowed. One thing you have to remember is what is an ad network at the end of the day. My value proposition inherently is “Hey, you don’t want to go to a thousand different sites and place this ad. I have relationships and technology to do that relationship for you.” So inherently, you’re rebrokering. That’s what’s happening. What you’re OK with and not OK with.

Then, transparency, and what level of transparency should be agreed upon right up front. Are you going to tell me the topics of those sites, the specific apps, what are you going to give me? And third, to the extent there’s tracking and analytics to see where you’re ads are being placed.

VentureBeat: Who are the biggest rebrokering offenders in the mobile ad space? Companies are starting to take matters into their own hands and distributing “blacklists” so honest and transparent ad networks can avoid them.

Pujji: The most common stuff on the Web I know is either showing on a site your not supposed to be showing, or showing in an app you’re not supposed to be showing on. The minor infractions may be “Hey, if I’m a casual gaming app I don’t want my ad showing showing in another casual gaming app game. Because its competitive and weird and it would be eventually hard to police.” And then, all of the way to porn sites. I think if you’re not tracking where the downloads are coming from or being clear, it’s a problem. Here’s the other thing that happens in the space; we’ve seen this a little bit I’d say. Sometimes the buyers are the ones who sometimes drive that. The big guys have to worry about their brands; they’re careful about it. But every now and again, you get a buyer who wants to do anything necessary to get their app downloaded.

VentureBeat: Right now in the mobile ad space you have like 300 publishers, ad companies, ad brokers, and gaming outfits all vying for an industry that predictions peg at $35 billion next year. Can the industry sustain itself with this many players?

Pujji: I word use the word consolidation. Because its natural, right, in a space like this, these businesses, they’re straightforward to start but very challenging to scale. So what happens is a bunch of these little people start these businesses and get to a certain place and then find it hard to scale. So they either combine with one another, and if they’re not doing anything special, or their clients aren’t really swearing by them, they go away. So I’d say its more of a consolidation. We were talking about this earlier, right — you’re client is your god. If you violate an agreement with your client, nothing could be worse than that. I’d say, like in 18 months. The world wants to see who becomes the winner, the biggest guys, in the space naturally.

Pujji: Of our spend and stuff? It’s over 90 percent.

VentureBeat: Are you nervous that so much of your success is predicated upon Facebook?

Pujji: They’re a great partner to us. The answer is really no. They really want to have a healthy ecosystem. When we think about doing the right thing with our clients, they want to come to one place where they can buy across platforms. So its less of a typical “Oh, hey, we have to diversify because were afraid of something,” and more of a “Our clients have needs, and we need to service those needs.” What’s motivating us is our big mobile clients saying “Hey, can you also do Twitter?” We can’t say no to that. So were a great partner with Facebook; we’re in their office, and they’re in our office every week. Its a very solid and strong partnership. One thing I will say that’s a little contrarian or provocative is, like, “Oh, is Facebook going to buy it’s own way [analytics platforms] to manage and track ads?’ And the answer is yes, right! But, this is critical and shouldn’t be taken out of context right, so is Google. Google Analytics has been around forever. [Facebook] wants to make it really easy for advertisers. It’s our job as a third party to innovate and provide more value for our clients so that our clients pick our tools.

VentureBeat: Do you see Facebook continuing to grow and innovate and stay relevant?

Pujji: [Facebook] is monetizing incredibly well. It’s a robust segment. Anyone below 18 and our ads aren’t even targeted to them. And Instagram [which Facebook owns] is brilliant. I think Facebook will continue to be really smart about M&As and what they’re doing. The idea that Facebook is part of our collective identities will remain. We don’t see a drop. But that its getting bigger, we’re bulls obviously, and our business is tied to them.