The last thing most of us need is another box underneath our TVs.

So either Amazon is ignorant of what consumers actually want — or CEO Jeff Bezos is crazy genius. My money’s on the latter.

The Fire TV is yet another media box in the vein of Roku’s devices and Apple TV. The big difference is that it centers on Amazon’s media library, although it also includes apps from Netflix, Hulu Plus, ESPN, and others.

In short, the Fire TV is basically a combination of Apple’s iTunes rentals and Netflix’s smorgasbord of content in a single box.

This isn’t Amazon’s first attempt to get into your living room. It has offered streaming video apps on Roku, game consoles, and smart TV platforms for years (but notably, not on Apple TV). Those apps gave members of its premium $99-a-year Prime service (which also grants members free two-day shipping) access to its content library. And some of Amazon’s past apps even let you directly rent or purchase Amazon streaming content from within the app.

But Fire TV gives Amazon a new window into living rooms — a window that it controls entirely. And Amazon is also one-upping other media boxes by packing in significant gaming capabilities.

Ultimately, the Fire TV is more of a chess piece for bringing Amazon into the living room than a killer product. 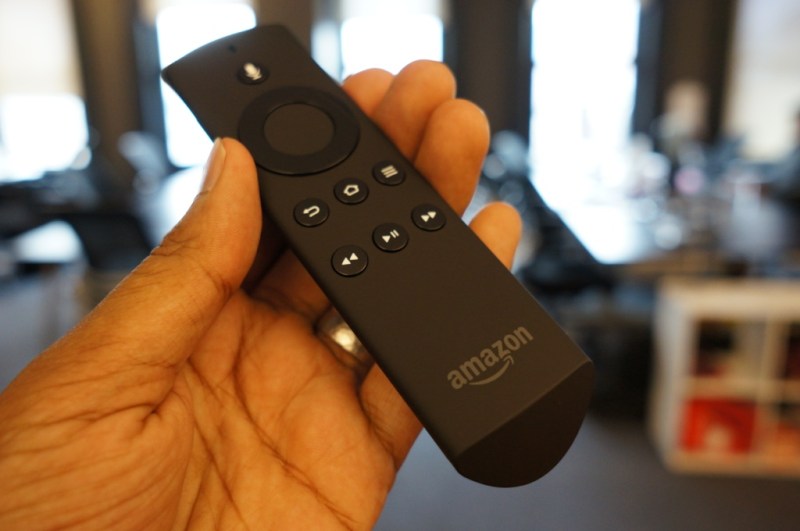 Above: The Fire TV's remote control

The good: Fast and easy to use

The Fire TV is as basic as a set-top box can be: It’s a black square. It’s meant to disappear into your home entertainment system after the initial setup. More thought clearly went into the Fire TV’s remote, which is curved and fits your hand better than most other TV remotes.

Upon first booting up the Fire TV, you see a training video that shows off the device’s most interesting feature: voice search. Just hold down the microphone button at the top of the Fire TV’s remote, say what you’re looking for (it can be an actor’s name or a movie’s title), and in a second or two, you’ve got a decent selection of results.

It’s certainly better than hunting and pecking at individual letters to input text, as you still must do on Apple TV and Roku’s boxes. (And yes, you still need to do that on the Fire TV to set up services like Netflix.)

Not surprisingly, the voice search results mainly throw you to Amazon’s library of content for you to rent and buy. If you’re an Amazon Prime member, that’s great, because you have access to a wealth of free streaming content. But it definitely favors Amazon over other content apps. I saw the occasional referral to content on Hulu Plus, but it wasn’t always accurate.

With its voice search, Amazon has a shot at making the best Netflix navigation interface ever — but that will likely never happen since it seems more interested in pushing its own content above all else.

The Fire TV’s voice search worked around 90 percent of the time, which is a far better success rate than I’ve seen with the Kinect voice commands on my Xbox One game console. Google TV also added support for voice search back in 2012, but it was only available on newer devices, and it didn’t work nearly as well. (Of course, Google revealed that feature long after everyone stopped caring about Google TV.) Roku also offers voice search now.

On top of Amazon’s content, the Fire TV also features apps from Netflix, Hulu Plus, ESPN, and others. Amazon is also opening up its platform to all developers, so we can expect plenty more apps down the line.

Navigating the Fire TV was generally zippy, thanks to its quad-core processor and lightweight apps (they’re all written in HTML). Apps loaded up in a few seconds, and it was a cinch hopping back and forth between the home screen. Videos loaded quickly across all apps, especially those in Amazon’s own library. The company is using its cloud infrastructure to help squash video loading times, so starting a video or trailer felt instantaneous, whereas on the Apple TV it may take a few seconds to get going.

On the whole, the Fire TVs apps are typically stylish and well designed. They’re reminiscent of the apps you’d find on Roku’s platform, which tend to be more visually appealing than the bland Apple TV app system.

As a lifelong gamer, I was also shocked to find myself enjoying playing games on the Fire TV. A few popular Android releases are available, including blockbuster block-building game Minecraft and Telltale Games’ The Walking Dead adventure franchise. Amazon has also launched its first homemade game on the platform, Sev Zero, a sci-fi title that’s a combination between tower defense games and shooters.

Games generally loaded quickly and looked decent on my television — but of course, since they’re Android titles, they’re not nearly as graphically rich as something from a traditional gaming console. You can play some games with the Fire TV’s remote, while others require a separate $40 game controller (more on that below).

Many companies have tried to turn Android into a console-like gaming platform (look at the Ouya or GameStick), but none have succeeded yet. After all, who wants to buy another box just to play a few indie or mobile games? But with the Fire TV, Amazon has a box that’s both a media powerhouse and a solid gaming machine. It’s not enough to replace the Xbox One or PlayStation 4 for most gamers, but it will definitely satisfy casual gamers and young kids.

Most important for Amazon, this could be the first Android gaming console that actually matters.

The bad: Bugs, a bad gamepad, lots of competition

After spending a week with the Fire TV, it seems like Amazon still has a few kinks to work out. It sometimes froze when I tried to wake it up from sleep mode, and I’ve had a few apps crash and send me back to the home screen. I also had trouble getting Dolby Digital surround sound sent to my receiver (which is kind of a deal-breaker for watching action movies).

Most of those issues seem software-related, though, so they’ll likely get taken care of in the next round of updates.

Amazon has a much bigger issue with its controller, which is the only way to play some of the more complex games. It’s bulky, feels cheap, and has some serious issues with its analog stick and directional pad. Overall, it feels more like a knockoff of the Xbox One’s controller rather than a direct competitor.

Casual gamers may not notice many issues, but anyone who shells out the extra $40 for the controller is probably a bit more demanding. The analog sticks felt a bit loose, and at times it seemed as if my commands weren’t making it to the screen in time. The direction pad just feels stiff. I can’t imagine playing a round of Street Fighter with it.

Amazon’s biggest problem with the Fire TV is that it doesn’t offer much of a compelling reason to buy it over Roku’s devices (which start at $60 and include an Amazon Prime app, so they have access to all of the same content as Fire TV) or the $99 Apple TV (which also offers access to a wide variety of content, although not Amazon Prime unless you’re using AirPlay to stream those movies from another device).

Roku has a much wider array of apps on its platform, and its cheaper price makes it ideal for second and third TVs around the house. Apple has some exclusive content on iTunes, and it’s also a great device for iOS and Mac owners thanks to Airplay streaming.

I’m also surprised Amazon isn’t offering some sort of Prime bundle or a deal for existing Prime customers. If the Fire TV were $50 for existing Prime owners, or perhaps bundled together with a yearly membership for $150, it would be a much more compelling product.

The verdict: A decent media box overshadowed by better choices

With the Fire TV, Amazon has successfully turned Android into a decent media platform, something that even Google TV failed to do. But with talk of yet another Android media stab from Google (the aptly named Android TV) and a new Apple TV reportedly in development, Amazon is going to have some stiff competition ahead.

At this point, most consumers would likely be better off with a competing media box. The Fire TV is could be a good choice for someone who is totally invested in Amazon’s ecosystem — someone who has a Kindle e-reader, a Kindle Fire tablet, and shuns iTunes for digital downloads.