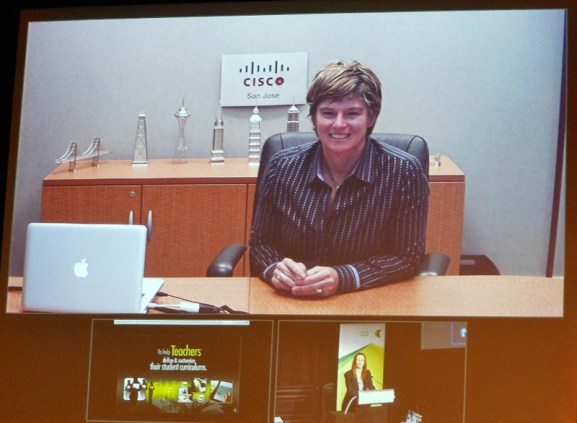 Ramona Pierson may be one of the closest things to Wonder Woman we have around. She was not only a math prodigy who joined the Marine Corps and wrote algorithms to find Russia’s nuclear silos and guide F-18 fighter missions, but she also survived a coma, built an analytics-based learning platform, and raised $5 million in seed funding.

Now she’s raised a new $16 million for her company, Declara. This is Declara’s first round of instiutional funding, and GSV Capital led the round, with additional participation from Data Collective, Founders Fund, and Catamount Ventures. The company will use the new funding to scale operations globally and build out its team. GSV Asset Management co-managing partner Mark Flynn will also join the company’s board.

Declara is a social network that helps people communicate and work more efficiently within their organization, and it combines semantic search, predictive analytics and machine learning “to surface the right content at the right time for individuals, making learning more personalized and discovery oriented,” as the company said in an official statement.

In short, it feeds each member of an organization a well-calibrated and well-timed stream of knowledge, including connections to colleagues, articles, other content, or even the names of experts in order to help them grow their skills. This way, the organization as a whole can gain from each member’s own growth.

When the company announced it seed funding, education was already a huge area of focus. Today, its network powers the Educational Services Australia network for the country’s teachers; Bécalos, an organization of Mexico’s Televisa Foundation; and Tu Clase, Tu País in Chile, among others.

“Learning needs to be a constant discovery, where formal learning taught in schools can be combined with informal learning, which is accomplished through everyday social collaboration,” said Ramona Pierson, Declara’s founder and chief executive.

“In our dynamic, ever-changing world, you can no longer fill up your knowledge tank until age 25 and cruise through life,” said Flynn in an official statement. “Today’s highly effective organizations enable individuals to continuously replenish what they know. Declara delivers an enterprise platform that fosters individualized learning, empowered by big data, accelerating innovation, and enabling collaboration.”

Declara was founded in 2012 and raised its $5 million in seed funding last September from Peter Thiel, Founders Fund, and Data Collective.