I dropped Samsung’s Galaxy S5 in a glass of water as soon as I got it. Not out of malice or clumsiness. I was just eager to test the water-resistant case.

And, yes, it emerged from the glass of water just fine.

The Galaxy S5 may look a lot like last year’s S4, but it represents a completely different Samsung — one that can actually dial down the hype and focus on features you’d actually want.

The Galaxy S5’s water- and dust-resistant case allows it to survive simple spills. It can even withstand a drop in the toilet. It also features the best Android phone camera I’ve ever seen, something that could be enough to entice buyers on its own.

There are fewer useless apps, questionable features, and cutesy sound effects this time around, all of which plagued the Galaxy S3 and S4. And Samsung has even refined its Android skin, so it no longer detracts from Android’s recent visual refinements.

Mostly, the Galaxy S5 shows that Samsung has learned from its (many) past mistakes. It’s a sign that Samsung might actually be able to innovate in future products rather than just follow industry leaders.

By taking a step back, Samsung has crafted one of the best Android phones today. And perhaps most surprisingly, it’s a Galaxy phone I’d actually want to use.

The good: A slew of features you actually want

In my review of the Galaxy S4 last year, I wrote that Samsung desperately needed some taste. With the Galaxy S5, it seems the company has finally discovered the secret to being tasteful — at least in terms of the features it’s offering.

Samsung is no longer trying to attract users with gimmicks like the eye-tracking feature from past Galaxy S phones (which kept the screen from dimming if you were reading something). Now it has features that people actually want, like the aforementioned water protection and vastly improved camera.

Samsung isn’t the first Android smartphone maker to offer a water-resistant case, but it’s the first company to do so for a product with huge mainstream appeal.

The Galaxy S5 sports the same faux-leather case as the Note 3, as well as the chrome-like trim around the edges. Samsung was a bit more playful with the S5’s color options though; the new blue case is the most eye-catching Galaxy cover yet.

Though it still has a plastic case, the S5’s new backing gives it a slightly warmer feel than its predecessor. It was also less slippery than the glossy plastic case Samsung used last year. The phone’s rear case is also removable, like previous models, allowing you to replace the battery and insert an SD card for additional storage.

The S5’s 5.1-inch screen is another standout. It’s bright and colorful, and it makes just about everything look great. The phone’s OLED screen feels more natural than Samsung’s past screens, which tended to oversaturate colors.

Like the new HTC One, and just about every smartphone coming out these days, the Galaxy S5 is packed with a blazing fast mobile processor (a 2.5GHz Snapdragon 801 chip). The phone definitely felt speedy, but it wasn’t noticeably faster than last year’s Galaxy S4. Apps and games loaded quickly, and the S5 didn’t break a sweat as I juggled multiple apps.

While Samsung and every other Android phone maker have strived to deliver cameras as good as the one aboard Apple’s latest iPhone and Nokia’s PureView camera, few have succeeded. This time around, Samsung may have finally crafted the first truly great Android camera.

While I’m well aware that more megapixels doesn’t necessarily make a better camera, it’s hard to deny the quality of the S5’s shooter. Photos taken during the day were crisp and packed in plenty of detail (even though they were slightly oversaturated at times). Photos also looked fantastic on the phone’s luscious screen.

In low light, the S5’s camera struggles a bit more. Photos tended to be murky due to an excessive use of noise filtering, and many shots ended up being a blurry mess.

Despite its weaknesses, I was mostly impressed. The Galaxy S5’s camera is miles ahead of what many other Android phones (including HTC’s One) feature.

The phone also proved plenty capable of shooting high-quality video, though the phone’s lack of true optical image stabilization does tend to make things a bit shaky. It’s nice to have the 4K video recording option, but there aren’t many 4K screens around to display it. You’re better off leaving the Galaxy S5 in its default 1080p video recording mode.

While the Galaxy S5 is by far Samsung’s most refined phone yet, its plastic case still feels weak compared to HTC’s polished, all-metal One. This time around, Samsung may have a legitimate argument for plastic, since it allows the S5 to be water-resistant while keeping a removable rear cover. 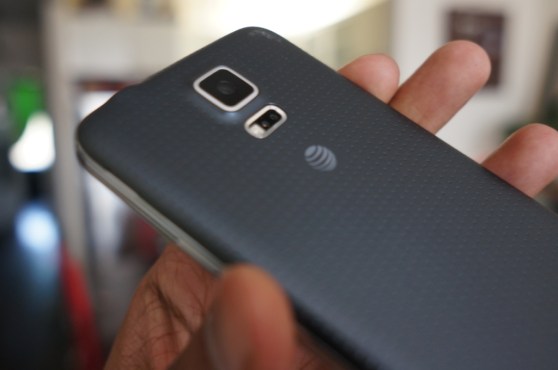 Another disappointing aspect of the Galaxy S5 is its fingerprint sensor, which gives you a simple way to unlock the phone without dealing with a password. The feature is clearly inspired by Apple’s Touch ID sensor in the iPhone 5S, but it isn’t implemented nearly as well.

While both sensors are integrated in the phone’s home button, Samsung’s sensor requires you to swipe your finger down to authenticate, while Apple’s merely has you hold a finger down on the home button. Swiping my finger on the S5 often felt like swiping down the dull side of a knife — it’s not exactly comforting, especially if you have to do it often.

Samsung’s fingerprint sensor is fairly accurate (it worked around 80 percent of the time).

The verdict: The finest Galaxy yet

After testing both the Galaxy S5 and HTC’s new One, I was surprised to find myself enjoying Samsung’s device a lot more.

The Galaxy S5 can survive any spill, it has a killer camera, and most importantly, it’s a joy to use. It’s the first Galaxy phone I would recommend to anyone without hesitation.

What intrigues me most about the S5 is that its weakest elements aren’t deal breakers — they just pale in comparison to what the phone gets right.

They’re yet another sign that Samsung has come a long way from the half-assed and over-hyped features of its last few devices.