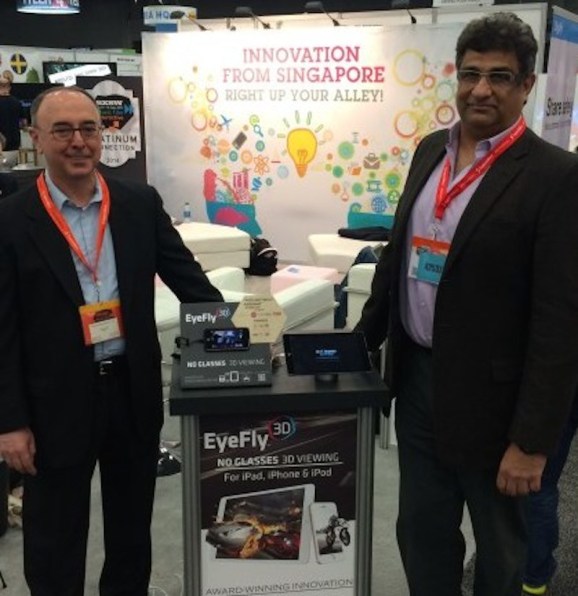 This sponsored post is produced in association with IDA Singapore.

Nanoveu makes a thin, transparent film that goes on your iPhone or iPad, enabling it to display 3D images.

It seems like magic, but it really works. The secret involves a technology enabling Nanoveu to imprint the plastic with extremely tiny, nano-scale lenses, on the order of 10-9 meters in diameter.

That’s small enough that Nanoveu’s $27 iPhone screen 3D film has half a million supertiny lenses embedded in it; the iPad version (which is going on sale in late May for about $60) has 2 million lenses.

The effect, with these screens, is to direct the light from each individual pixel in a slightly different direction. Some pixels’ light goes to your left eye, and some pixels’ light goes to your right eye. Combined with Nanoveu’s free iOS apps, which control the screen image, that enables your device to display 3D images by sending a slightly different version of the image to each eye, creating the parallax effect that tricks your brain into thinking that it’s looking at something with real depth instead of a flat screen.

Currently Nanoveu offers three free iOS apps: One for viewing 3D still images, one for 3D videos, and one for creating 3D images out of 2D images.

“This is just the beginning of the use case for this technology,” says Vidur Verma, an executive with Singapore-based Nanoveu. “It’s a consumer play at this point, but we’re looking to expand it to B2B.”

How could nanolenses become a B2B product? Well, consider the potential market for 3D interactive displays. If you go into a car dealership, you could view a full 3D image of the car you’re consider buying, while tweaking its options, details, and paint colors.

Currently, banking apps require you to use a username and password to log in, plus often a second method of authentication, such as a code texted to your phone or displayed on a key fob.

With Nanoveu, that code could be delivered in a visually-scrambled form to the customer’s phone. Then they could pull out their credit card, which would have a small “window” of plastic that’s imprinted with Nanoveu lenses in a particular pattern. Place that window in front of the scrambled image, and the digits will appear clearly. Customers can then use those digits to log in to their banking app.

If you don’t have the plastic window, you can’t descramble the image. This would provide a far higher level of security than most current two-factor authentication systems, and it would be quite convenient, since the necessary “decoder” would simply be a piece of plastic embedded in the bank card.

Verma acknowledges that it might be hard to convince banks to adopt this kind of technology, but he’s hopeful, because they are highly motivated to avoid embarrassing hacks and data breaches.

“It’s going to be a tough sell because financial institutions are very stuck in their old ways of thinking. But they know that their current methods are not secure,” Verma said.

Nanoveu was founded in April, 2012, with an exclusive 10-year license from Temasek Polytechnic in Singapore, where the nanolens technology originated. It has raised about $2 million so far from private investors and is currently seeking another $5 million investment at a $20 million valuation.