Hello, HootSuite. Or is it goodbye?

CRM giant Salesforce, which has aggressively moved into the marketing technology and social spaces in the past three years by buying Pardot, ExactTarget, Radian6, and BuddyMedia, announced today that it is combining its two previously acquired social technologies to create one uber-suite for social, to be called Social Studio.

It’ll be a key part of Salesforce’s growing marketing cloud, under the ExactTarget brand.

He should know — Lazerow is the former cofounder and CEO of BuddyMedia, which Salesforce bought two years ago for almost $700 million for its social publishing chops. In fact, Lazerow and Marcel LeBrun, the founder and CEO of Radian6, which Salesforce bought the previous year for $326 million for its social listening technology, worked together to not just integrate the publishing and the listening tools but to build an entire new combined tool from the ground up.

“We rebuilt the whole product — it’s enterprise-scale, but simple as Facebook,” Lazerow told me. “This is the only social platform for social listening and engagement and analytics and marketing.”

Above: All the components of Salesforce’s updated ExactTarget Marketing Cloud

That marketing, which currently includes only earned and owned media, will soon include social media advertising via promoted products and other ad formats, as Salesforce continues to integrate by including its Social.com ad platform right into Social Studio over the next few months.

(We’ll be discussing all of these topics, by the way, at VentureBeat’s GrowthBeat conference in early August.)

LeBrun, who still lives and works in the picturesque Canadian province of New Brunswick (just up from Maine) where he started Radian6, said that the goal was to eliminate the “swivel chair” experience of logging into separate systems that marketers have been forced into by owning multiple engagement and listening and advertising platforms for social marketing.

“It’s one simple tool with easy automated rules, team collaboration, and the ability to assign cases in Salesforce,” LeBrun, who is now Salesforce’s chief product officer for its marketing cloud, said. 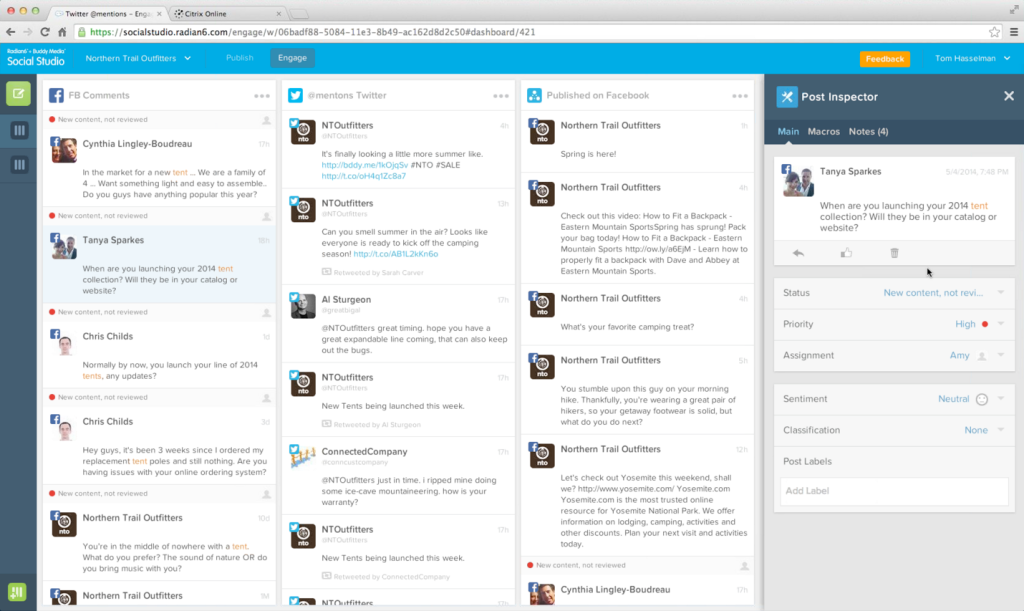 Above: Social Suite is somewhat reminiscent of HootSuite’s interface.

As you’d expect from Salesforce, the tool is enterprise-scale, with the ability to assign and manage social media users in multi-brand, multi-location, and multi-country scenarios, monitor content, and add workflows and approvals. It has a unified content marketing calendar that shows all upcoming content, and natively integrates with content discovery platforms like Kontera, Trendspotter, and Rallyverse, so you can simply find a piece of hot trending content, attach your messaging or twist to it, and schedule it for publication. It also has built-in macros to automate common tasks, and as many features as you’d expect from the love-child of two large, mature, and respected social tools.

For example, when publishing you can see analytics integrated into the content calendar, immediately telling you what’s working and what’s not.

The challenge for Social Studio, now a key part of Salesforce’s ExactTarget Marketing Cloud, will be to prove that it’s better for the enterprise than HootSuite, clearly the current leader in the space. While other solo competitors such as Spredfast, Expion, Sprinklr, and Hearsay nip at its heels, HootSuite’s 7-8 million users and its $165 million war chest are pretty well unmatched by anything except, perhaps, what the other major marketing suites from Adobe, Oracle, IBM, and others can put together.

Above: Current components of Social Studio. Advertising will soon be added, Salesforce says.

LeBrun hinted that HootSuite, which has a huge number of enterprise clients, might not be enterprise enough.

“This is really the most sophisticated enterprise system,” he said about Social Studio when I asked about the Vancouver-based company. “Social Studio is just amazing for any company with any kind of complexity … dozens or hundreds of social accounts.”

And — anticipating the standard line of questioning about whether the components of a suite can ever be as good as a purpose-built, focused point solution — he added that “each component” of Salesforce’s marketing cloud is best-in-class by itself. 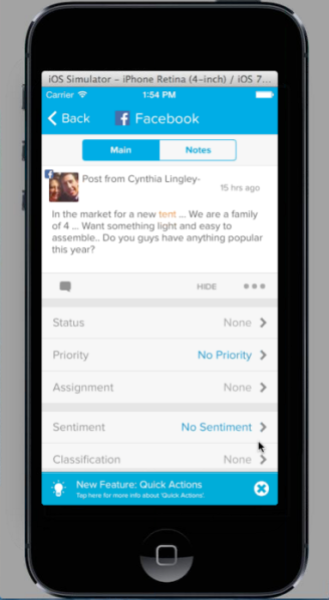 Above: Everything in Social Studio is also available in a mobile app

Lazerow took a different tack, saying that point solutions are part of the problem for the modern marketer — a point emphasized by Salesforce’s pitch deck for journalists, which highlights the massive complexity for high-tech marketers today in a 943+ company, 43+ category “martec” world. “As social penetrates the enterprise, integration is not just a nice-to-have, it’s required to be best-of-breed,” he said. “Our customers are demanding this.”

For Lazerow, this is also about fulfilling the mission of Salesforce1, which enables one-to-one customer conversations on a global scale.

“When we look at 1-1, we’re looking [not only] within each channel but also across each channel,” he said. “All of that flows into ContactBuilder for a unified view of the customer, so if someone tweets at you or posts about you or responds to an email, all of that is being captured by the system.”

Then, with Social Studio, he said, you can use that social data — or your Salesforce CRM data — to market to your customers or prospects on Facebook or Twitter or beyond. Especially, of course, if you’ve run campaigns to “connect all the dots” and assign email addresses to Facebook user IDs.

The proof point that Salesforce has it right and that enterprise customers are going to pick Social Studio is, Lazerow says, that Citrix checked 25 different enterprise solutions for its new social media tool — including, of course, a beta version of Social Studio — and picked the Salesforce product.

“In order for Citrix to be successful with social marketing, we need to have a single platform,” Citrix director of social marketing Justin Levy said in a statement. “We selected Radian6 Buddy Media Social Studio as our social media management system. It will allow Citrix to manage our global social properties more efficiently and securely, understand how our social content is performing, what are people saying about us, and integrate it into our established business processes across the company.”

Whether that’s true or not for other enterprises we’ll soon find out. One thing that’s clear: If you’re using Salesforce already, it’s going to be easy to use Social Studio, and perhaps the entire ExactTarget Marketing Cloud. As we’ve seen just this past month with Pardot, which added more than 1,100 new users in April, Salesforce can apply massive marketing chops to growing its in-house solutions quickly, likely by making it very attractive for those already in the Salesforce universe to increase their consumption of the drug. All of that assumes, of course, that Salesforce has done its homework and the tool won’t have the birth pangs that so many new software projects are plagued with.

Social Studio is available tomorrow for all existing customers at “no additional charge,” LeBrun told me. Pricing starts at $1,500/month.

HootSuite, as well as others in the enterprise social world, had better be on the alert. Because one thing Salesforce is not doing is standing still.

“Our customers are looking at the innovation we continue to do as if we’re still a startup,” Lazerow said. “And I think we’re moving faster than anyone else in the market.”