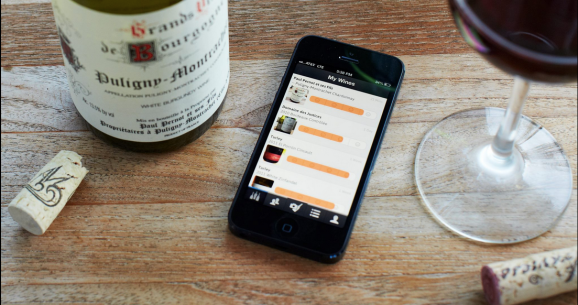 What do you get when you mix together Shazam, Yelp, and a large database of wines? That would be Delectable.

Delectable is announcing today that it’s brought in $3 million as its first institutional round of funding for its wine app. Deep Fork Capital, DN Capital, and Ceyun Ventures led the round, with additional participation from David Sacks, Max Levchin, Joe Lonsdale, and Gary Veynerchuk. The company says it plans on using the new funds to continue building out its technology and database and to release an Android app soon.

Delectable’s business has two sides, which work in tandem together. First, it’s a mobile app (only on iOS for now) that enables wine aficionados to identify wines through its image recognition technology, get recommendations of wines based on their behavior, and follow friends and experts within the app’s network. The company also boasts having many wine experts in its network, giving the in-app ratings more credibility.

The other side of Delectable, and currently still a “hobby” for the startup, is wine commerce. The company is building partnerships with wine sellers and even some wineries so its users can order and purchase wine right from the app.

“There’s something magical about being at a restaurant and saying, ‘I want a case of this [wine] delivered to my house next week,'” Delectable founder and chief executive Alex Fishman said to VentureBeat in an interview.

When asked whether purchasing through the company yields the best prices possible, he also added, “Delectable’s prices are extremely competitive.”

Prior to founding Delectable, Fishman worked as an engineer at data-software company Palantir, where he saw first hand the power of data to make sense of the world.

“I’d also been very disappointed with with what’s available. I started Delectable with the mission of making the world a more delicious place,” Fishman added.

Delectable has put together a large database of more than 2 million wines using data sets from various sources, including retailer websites and individual producers’ websites.

Fishman also explained that image recognition for wine is extremely difficult due to the very slight differences between labels. For example, wines often have the same label design year-to-year, and it’s up to the technology to pick up on the tiny one-digit difference between the labels. Beer, on the other hand, apparently has much more easily distinguished labels, said Fishman.

Naturally, given the wine market’s $300 billion size, Delectable is not the only app for enthusiasts: Drync, Vivinto, Club W, and many more are attempting to help people identify, track, and discover wines. Image recognition for wine labels is an idea many have been working on for a while.