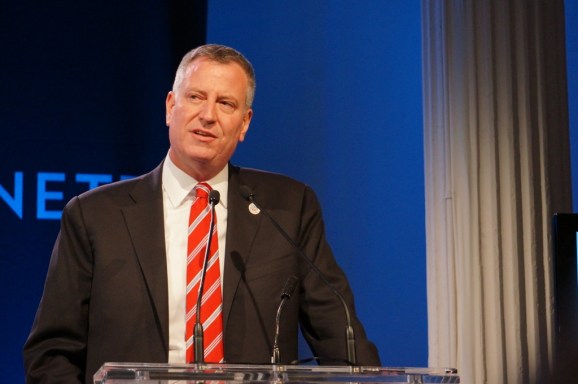 New York City Mayor Bill de Blasio wants to make it clear he’s just as attuned to the tech community as his predecessor.

De Blasio didn’t elaborate on the program much, other than mentioning that it will be backed by JPMorgan Chase and other financial companies. Additional details still aren’t available from the mayor’s office at the time of publication.

The program is part of de Blasio’s overall effort to push the city’s technology community forward, continuing the work that began under former mayor Michael Bloomberg. While the mayor hasn’t spoken out much about the city’s tech scene so far (something that’s worried some entrepreneurs), his speech today wasn’t far off from the self-congratulatory rhetoric Bloomberg was known for.

The mayor kicked things off by pointing out that a similar keynote gathering in Silicon Valley would involve driving long distances, while many New Yorkers will be able to walk back to their offices. He also pointed out that there are now more than 291,000 jobs in the city’s tech ecosystem.

“We [in the public sector] should in effect be disruptive, that’s what good public servants have always been,” de Blasio said. “Disruption is synonymous with the tech community … There is a synergy, there is a commonality. We are change agents in our administration, you are change agents in the private sector.”

Solidifying his support with the country’s broader technology community, de Blasio also pushed for comprehensive federal immigration reform. On the local level, his administration is also pushing for municipal ID cards, which will give anyone access to basic services despite their immigration status. The de Blasio administration will also announce a task force tomorrow morning to “fundamentally shift workforce and education efforts” towards technology.

Additionally, de Blasio said he will focus on increasing broadband access in NYC. His administration will push for more competition in the broadband arena, and it’s also reexamining its franchise agreements with Verizon’s fiber Internet service and Time Warner Cable. The city also recently announced an ambitious project to turn Manhattan’s payphones into a free, widespread Wi-Fi network. More than 80,000 Harlem citizens will also be getting a fee Wi-Fi network soon.

Unlike Michael Bloomberg, who was a renowned tech entrepreneur before he served as mayor for three terms, de Blasio still has a lot to prove to the tech community. The Tech Talent Pipeline is a start, but in the future he’ll need to announce bigger programs to accelerate the growth of the tech community.