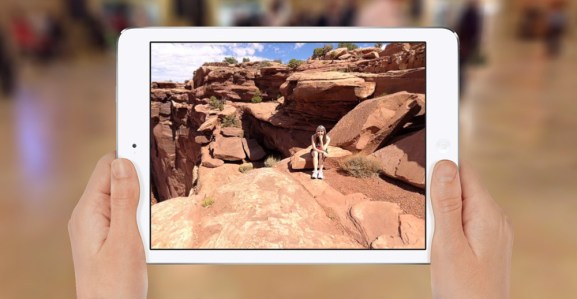 The Bubbli app for iPad.

Dropbox has acquired another photo startup — but don’t worry, it’s not going to kill the app (for now).

The cloud storage giant has scooped up 3D photo startup Bubbli, according to an email the startup’s cofounders sent out to users today.

Bubbli’s app enables those toting iPhones and iPads to create 360-degree photo “bubbles,” complete with sound. Effectively, bubbles put you in the shoes of the photographer, giving you the picture-taker’s view from where they were standing.

But unlike Loom, which shut down its app after the startup joined Dropbox, Bubbli will continue to operate for the foreseeable future.

Bubbli raised $2 million in a seed round that August Capital led in early 2011.

Here’s the complete email from Bubbli.

We have some exciting news to share: Dropbox has acquired Bubbli!

We’re thrilled to be joining Dropbox. Bubbli’s goal has always been to capture experiences in a way that feels like you are not just viewing photos but reliving memories. By joining forces, we’ll be able to continue to transform how you experience your memories on a much larger scale.

The bubbles everyone has shared have blown us away. We’re working on integrating bubbles into Dropbox and we’ll keep you posted on our progress. Until then, you can continue capturing bubbles the same way you have in the past!

Thank you for all your support thus far and here’s to the future!